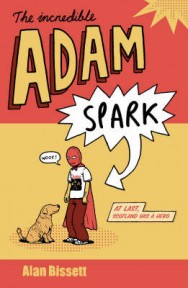 A dazzling performance (think Forrest Gump, think Curious Incident, think Anne Donovan’s Buddha Da) from one of Scotland’s brightest new talents. Adam Spark. Eighteen going on eight-and-a-half. Fast-food worker. Queen fan. Last in the queue for luck. On waking from an accident in which he saves a child, he has the distinct impression that all is far from right. What are these curious lights that seem to surround people? Why are animals and machines trying to speak to him? And can he really control time? Is it just his imagination, or has Adam Spark been chosen to become Scotland’s first, and only, superhero? This, however, is the least of his problems. The local gang is luring him into deeper and darker peril. His sister and lone carer, Jude, is giving all her love to another woman. And if Jude abandons Adam – or Adam drives her away – all the superpowers in the world won’t be able to save him.

Reviews of The Incredible Adam Spark

'Bizarre, hilarious, moving' Big Issue in Scotland; 'Sparky is a terrific character' Sunday Herald; 'Sparky is a virtuoso literary creation… This is a fresh and exciting read' Scotland on Sunday .

Alan Bissett was born in Falkirk in 1975, and his acclaimed first novel, Boyracers, was published whilst he was still a student. He is a former English teacher and has lectured in Creative Writing at the University of Leeds, and now teaches at the University of Glasgow.