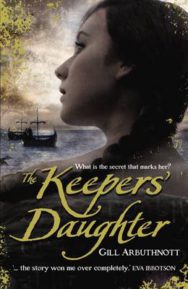 Ten years ago, Alaric, leader of the Shadowmen, killed many of the Keepers – the teachers and bearers of ancient knowledge threatening his barbaric rule. Now rebellion is flaring up in the Archipelago again and the Shadowmen are out hunting for Keepers once more. Fourteen-year-old, Nyssa, and her uncle, Marius, descendants of the Keepers, must flee, but there is a greater reason that Nyssa is in danger: on her skull is one half of a strange tattoo, three lines of writing in a strange unintelligible script, the Legeof the Keepers. Her search for the other half of the script begins, leading her down a dangerous path from which she may never return.