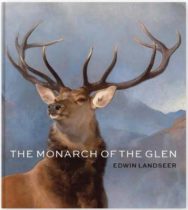 Home > Uncategorized > The Monarch of the Glen

The Monarch of the Glen

The Monarch of the Glen by Sir Edwin Landseer (1802 1873) is one of the most celebrated paintings of the nineteenth century. It was acquired by the National Galleries of Scotland in 2017. In this new book, the first to focus in detail on this iconic picture, Christopher Baker explores its complex and fascinating history. He places Landseer’s work in the context of the artist’s meteoric career, considers the circumstances of its high-profile commission and its extraordinary subsequent reputation. When so much Victorian art fell out of fashion, Landseer’s Monarch took on a new role as marketing image, bringing it global recognition. It also inspired the work of many other artists, ranging from Sir Bernard Partridge and Ronald Searle to Sir Peter Blake and Peter Saville. Today the picture has an intriguing status, being seen by some as a splendid celebration of Scotland’s natural wonders and by others as an archaic trophy. This publication will make a significant contribution to the debates that it continues to stimulate.The painting will tour to four Scottish venues in late 2017 and early 2018 (Inverness Museum & Art Gallery, 6 October – 19 November 2017; Perth Museum and Art Gallery, 25 November 2017 – 14 January 2018; Paisley Museum and Art Gallery, 20 January – 11 March 2018; Kirkcudbright Galleries, 25 March – 12 May 2018).

Christopher Baker has been the Director of the Scottish National Portrait Gallery since 2012 and in addition is currently Acting Director of the Scottish National Gallery. His previous publications include Jean-Etienne Liotard (2015), J.M.W. Turner: The Vaughan Bequest (2006; new edition due 2018) and English Drawings and Watercolours: 1600-1900 (2011).