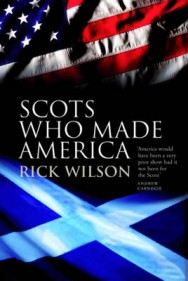 Home > Sports & Hobbies > The Scots Who Made America

The Scots Who Made America

Andrew Carnegie was born in Dumfermline, son of a humble weaver, but left his native shores for the New World in 1848. On his arrival in Pennsylvania he became a bobbin-boy at a local cotton mill. Then followed a serious of jobs, each better than the last, until Carnegie was in a position to set up his own business, the Carnegie Steel Company. This business made the Fife-born lad the richest man in the world; a typical example of a home-born Scot whose effect on the life and culture of the United States has been incalculable. Wilson provides an accessible and intriguing guide to Scottish innovators who have given their energy and inspiration to improving the fields of engineering, publishing, politics, literature, business and medicine in the United States, from the alleged Scots discovery of America by Scots Nobleman Henry St Clair in the 14th century, to the photographer who captured no less than 12 presidents for prosperity, Henry Benson. Others, like Sean Connery, J.M Barrie and Robert Burns, have a more removed, but just as potent influence on the States, as Wilson illustrates.Featured Scots include: Alexander Graham Bell, James Gordon Bennett, Harry Benson, Binny and Ronaldson, David Dunbar Buick., Andrew Carnegie, James Craik, Robert Dollar, Robert Forbes, Hugh Grant, Andrew Hallidie, Captain Kidd, John Muir, allan Pinkerton, Alexander Wilson, James Wilson, Samuel Wilson, John Witherspoon, Alexander Bain, Sean Connery and Harry Lauder.

Rick Wilson is a freelance writer and former editor of Holland Life and The Scotsman Magazine.