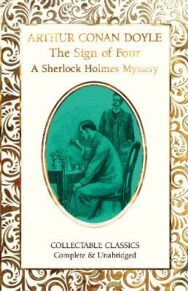 The Sign of the Four (A Sherlock Holmes Mystery)

Little treasures, the FLAME TREE COLLECTABLE CLASSICS are chosen to create a delightful and timeless home library. Each stunning, gift edition features deluxe cover treatments, ribbon markers, luxury endpapers and gilded edges. The unabridged text is accompanied by a Glossary of Victorian and Literary terms produced for the modern reader. In this Conan Doyle adventure Sherlock Holmes and his trusty companion Dr Watson accompany a young woman to a suspicious location in the fog-bound streets of London.

Arthur Conan Doyle (1859-1930) was born in Edinburgh, Scotland. As a medical student he was so impressed by his professor’s powers of deduction that he was inspired to create the illustrious and much-loved figure Sherlock Holmes. Holmes is known for his keen power of observation and logical reasoning, which often astounds his companion Dr. Watson. However, Conan Doyle became increasingly interested in spiritualism, leaving him keen to explore more fantastical elements in his stories. Conan Doyle was a prolific writer of non-fiction, history, plays, poems, short stories and novels, and whatever the subject, his vibrant and remarkable characters have breathed life into all of his work, engaging readers throughout the decades.Judith John (Glossary) is a writer and editor specializing in literature and history. She has worked as an editor on major educational projects, including English A: Literature for the Pearson International Baccalaureate series. Judith’s major research interests include Romantic and Gothic literature, and Renaissance drama.