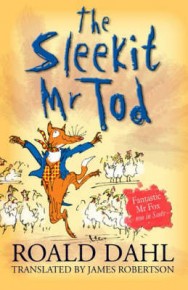 Doon in the glen there were three ferms. The men that had these ferms were aboot as scunnersome and grippy as ony men ye could meet. They were cried Fermer Bodge, Fermer Bauchle and Fermer Beek.On a brae above the glen there wis a widd. In the widd there wis a muckle tree. Unner the tree there wis a hole. In the hole steyed Mr Tod, Mrs Tod and the fower Wee Tods. Ilka nicht, as soon as it wis gloamin-time, Mr Tod wid say tae Mrs Tod,’Weel, ma deerie, whut it’ll be this time? A sonsie fat cookie fae Bodge? A deuk or a goose fae Bauchle? Or a braw bubblyjock fae Beek?’And when Mrs Tod had telt him whit she wantit, Mr Tod wid jouk doon intae the glen in the mirk o the nicht and help himself.And so the scene is set for a grand confrontation between the scunnersome fermers and the tremendous Tods. Following on from the phenomenal success of the bestselling The Eejits and Geordie’s Mingin Medicine, Scots translations of Roald Dahl’s The Twits and George’s Marvelous Medicine, Itchy Coo presents another Scots version of a Roald Dahl classic.This time Fantastic Mr Fox has been transformed into Sleekit Mr Tod and he’ll require all his wily wits to escape Fermers Bodge, Bauchle and Beek while, at the same time, raid their well-stocked stores for a full-scale banquet. But who will win?

Roald Dahl is one of the world’s most beloved children’s authors. He created some of the most memorable and popular books in children’s fiction, such as Charlie and the Chocolate Factory, Matilda and The BFG. James Robertson is the author and editor of numerous popular children’s books written in Scots including the Katie books, A Moose In The Hoose and King o the Midden.