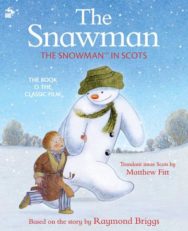 The Snawman: The Snowman in Scots

By Raymond Briggs; Translated into Scots by Matthew Fitt

The Snawman. The Book o the classic film.
The Snowman in Scots

When the snaw faws, magic glisters in the air.

Wan snawy day a laddie builds a Snawman and in the middle o the nicht the Snawman comes tae life.

Featurin artwork fae the original animatit film The Snowman, this bonnie book will tak ye on a magical journey tae the North Pole and hame again.

Raymond Briggs is one of our most respected and beloved artists. Born in Wimbledon Park in 1934, he studied at the Wimbledon School of Art and later at the Slade School of Fine Art, and went on to produce a treasure trove of work. He has created characters that are now icons for generations of children, including Fungus the Bogeyman, Father Christmas and, of course, the beloved Snowman.

Matthew Fitt is a novelist and poet as well as a translator. An acknowledged expert in the field of Scots language education, he has written numerous children’s books and translated a number of titles into Scots including Roald Dahl’s The Eejits and Geordie’s Mingin Medicine, David Walliams’ Mr Mingin and Billionaire Bairn and J.K. Rowling’s Harry Potter and the Philosopher’s Stane. He is a co-founder of and contributing author to the Itchy Coo imprint. Matthew was winner of the Outstanding Contribution to Children’s Books award at the 2020 Scottish Book Trust Awards.