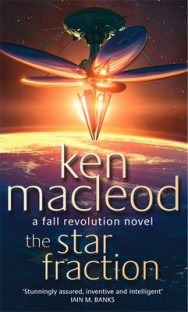 In a newer world order where the peace process is deadlier than the wars …Moh Kohn is a security mercenary with a smart gun, reflexes to die for and memories he doesn’t want to reach. Jamis Taine is a scientist with a new line in memory drugs, anti-tech terrorists on her case and the STASIS cops on her trail. Jordan Brown is a teenage atheist with a guilty conscience, a wad of illicit cash and an urgent need to get a life. Between them they’ve started the countdown to the final confrontation, as the cryptic Star Fraction assembles its codes, the Army of the New Republic prepares its offensive and Space Defence lines up its laser weapons for the hour of the Watchmaker …

Reviews of The Star Fraction

Stunningly assured, inventive and intelligent. THE STAR FRACTION is richly readable and riddled with accuracies. The book takes near future fiction into cyberian places it hasn't dared go before. SF bibliographies better take note; grab a first edition now before they disappear; this man is going to be a major writer. Iain M. Banks He's clever, witty, and his future has just the right grainy feel to it SFX Prose sleek and fast as the technology it describes … watch this man go global Peter F. Hamilton An immensely exciting SF adventure … The Star Fraction is an auspicious debut STARBURST

Since graduating from Glasgow University in 1976, Ken MacLeod has worked as a computer analyst in Edinburgh. He now writes full time.