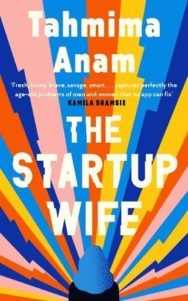 Selected as a Best Book of 2021 by the Observer, Stylist, Cosmopolitan, Red and the Daily MailHalfway through her PhD and already dreaming of running her own lab, computer scientist Asha has her future all mapped out. Then a chance meeting and whirlwind romance with her old high-school crush, Cyrus, changes everything.Dreaming big, together with their friend Jules they come up with a revolutionary idea: to build a social networking app that could bring meaning to millions of lives. While Asha creates an ingenious algorithm, Cyrus’ charismatic appeal throws him into the spotlight.When the app explodes into the next big thing, Asha should be happy, shouldn’t she? But why does she feel invisible in the boardroom of her own company? Why are decisions being made without her? Gripping, witty and razor-sharp, The Startup Wife is a blistering novel about big ambitions, speaking out and standing up for what you believe in.

Tahmima Anam is an award-winning novelist, short-story writer and Harvard-educated anthropologist. Her work has been published in the New York Times, Granta and the Guardian. She is also an executive director of a music technology startup with offices in New York and London.@tahmima