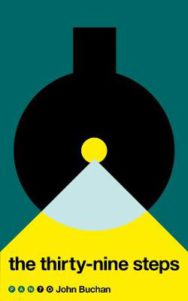 A special edition of The Thirty-Nine Steps by John Buchan reissued with a bright retro design to celebrate Pan’s 70th anniversary. When a strange man turns up on his doorstep with stories of spies and assassinations, Richard Hannay is drawn into the murky world of international espionage. Four days later, the stranger is dead and Hannay is caught up in a dramatic race to prevent a world war. Hunted across Britain by enemies unknown, he must outwit his pursuers and try to reach the site of the mysterious ‘Thirty-Nine Steps’. Set in 1914, this classic British thriller has been adapted many times for stage, television and film.

John Buchan was born in Perth in 1875, the son of a Church of Scotland Minister. After being educated locally, he attended Glasgow University and Brasenose College Oxford. He exchanged comparative poverty for affluence by his success as an author, but it was as a lawyer that his reputation began. He went to South Africa to serve as private secretary to the British Colonial administrator, Alfred, Lord Milner and assisted in reconstruction of the country after the Boer War. He entered publishing in 1906 as partner in the firm of his friend Thomas Nelson and married Susan Charlotte Grosvenor, cousin of the Duke of Westminster, in 1907. They had four children. Buchan was elected to Parliament in 1911, served in various capacities during the First World War, including writing speeches for Sir Douglas Haig and taking on the role of Director of Information under Lord Beaverbrook. He returned to the House of Commons in 1927 and then in 1935 he was appointed Governor-General of Canada and became Lord Tweedsmuir. He died in 1940. John Buchan was a prolific author and wrote poetry and biographies as well as novels, but he is still best remembered for his adventure stories and in particular the five Hannay novels: The Thirty Nine Steps, Greenmantle, Mr Standfast, The Three Hostages, and The Island of Sheep.