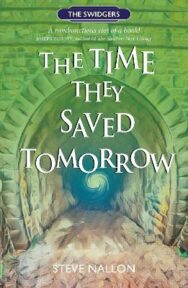 Reviews of The Time They Saved Tomorrow: Swidger Book 2

Praise for The Time That Never Was, Book 1 of The Swidgers Series'Grabs you from the beginning and doesn't let go. Steve is a master mimic and uses all his skills to create a powerful and dramatic tale of mystery!' – Rory Bremner, BAFTA winning writer and performer'A rambunctious riot of a book with a totally unpredictable plot – I never knew where I was going to be taken next! Granny is a joy of a character; delightfully irreverent with wicked one-liners.' – Joseph Elliott, YA author of The Shadow Skye Series'This brilliant story whizzes along and follows William's transformation from nervy kid at the back of the class to fully fledged adventure hero. We see this wonderful adventure through William's eyes and share the adrenalin rush from his perspective. This is a great story for YA readers and grown-ups who, like William, find themselves caught up in the whirlwind of life. I loved it!' – Sonia Beldom, author of the popular children's book series Granny Franny's Big Red Bus.'I loved it. As a former teacher, the parent teacher meetings struck a particular chord.' – Geoff Northcott, comedian, writer and broadcaster'Steve Nallon is an experienced and formidable talent and this departure into YA fantasy may win him a whole new generation of fans.' – Jenny Lecoat, screenwriter, novelist and author of Hedy's Girl and the movie Another Mother's Son'Steve Nallon has always been very good at everything he's done but this first novel could be his finest hour! From the very start, it is intriguing, innovative, snappy and witty. Nallon writes with a compelling sense of rhythm and just makes you want to keep reading and going further into his magical world. It really does gallop along. Granny is a great creation and a magnificent character in every sense: engaging, shocking, loveable, embarrassing, bright and very, very funny! It's all very impressive!' – Alistair McGowan, BAFTA winning writer and performer'The Time That Never Was is the marvellous story of a boy growing up with a very special power. He is a Swidger and Swidgers can see into people's timelines and perhaps alter them. But who, or what, is watching them? Exciting, often very funny and always gripping, this is a book about adventures in time – Past, Present and Future. And in the future? Well, the good news is that there is already a sequel on the way.' – William Palmer, novelist and author of The Contract, The India House, Four Last Things, The Good Republic, The Island Rescue.'Beguiling, inventive and magical: Nallon has conjured up a perfect world and a perfect read. A dazzling piece of fiction.' – Jonathan Maitland, author of the play Dead Sheep and presenter of ITV's current affairs series Tonight.

STEVE NALLON has been a writer and performer in the world of comedy for over forty years. Steve began his performing life with his own comedy act on the Northern Working Men’s Club Circuit in Yorkshire back in the 1970s. After gaining a degree in Drama and English at the University of Birmingham, Steve became a founding member of the cult satirical comedy series Spitting Image, where for over a decade he voiced many of the programme’s most iconic characters, including Margaret Thatcher, Roy Hattersley, Alan Bennett and The Queen Mum. Steve’s acting work now ranges from theatre, film and television, to video games, puppetry and audio books. As a playwright and comedy writer, Steve has a considerable body of credits to his name, including plays and series for BBC radio, three one-man theatre shows and the satirical book I, Margaret, which he co-wrote with the novelist Tom Holt. Over the years, Steve has contributed to numerous periodicals such as The New Statesman and Musical Stages, and is a much sought after speaker on the lecture circuit for his insightful and amusing talks.