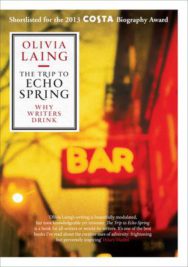 Home > Academic > Arts and Humanities > The Trip to Echo Spring: Why Writers Drink

The Trip to Echo Spring: Why Writers Drink

This is shortlisted for the 2013 Costa Biography Award. Why is it that some of the greatest works of literature have been produced by writers in the grip of alcoholism, an addiction that cost them personal happiness and caused harm to those who loved them? In The Trip to Echo Spring, Olivia Laing examines the link between creativity and alcohol through the work and lives of six extraordinary men: F. Scott Fitzgerald, Ernest Hemingway, Tennessee Williams, John Berryman, John Cheever and Raymond Carver. All six of these writers were alcoholics, and the subject of drinking surfaces in some of their finest work, from Cat on a Hot Tin Roof to A Moveable Feast. Often they did their drinking together – Hemingway and Fitzgerald ricocheting through the cafes of 1920s Paris; Carver and Cheever speeding to the liquor store in Iowa in the icy winter of 1973. Olivia Laing grew up in an alcoholic family herself. One spring, wanting to make sense of this ferocious, entangling disease, she took a journey across America that plunged her into the heart of these overlapping lives.As she travels from Cheever’s New York to Williams’ New Orleans, from Hemingway’s Key West to Carver’s Port Angeles, she pieces together a topographical map of alcoholism, from the horrors of addiction to the miraculous possibilities of recovery. Beautiful, captivating and original, The Trip to Echo Spring strips away the myth of the alcoholic writer to reveal the terrible price creativity can exert.

Olivia Laing’s first book, To the River, was described as ‘sublime’ by the Times, ‘magical’ by the Telegraph and ‘deeply intelligent’ by the Literary Review. It was a book of the year in the Evening Standard, Independent and Financial Times and was shortlisted for the Royal Society of Literature Ondaatje Prize and the Dolman Travel Book of the Year. The Trip to Echo Spring was shortlisted for the 2013 Costa Biography Award, the 2014 Transmission Prize and the Gordon Burn Prize, was widely reviewed and was also a book of the year in The Times, Observer, Metro, Economist and Times Literary Supplement. Olivia is the former Deputy Books Editor of the Observer and writes for a variety of publications, including the Observer, New Statesman, Guardian and Times Literary Supplement. She is a 2011 MacDowell Fellow and has received awards from the Arts Council and the Authors’ Foundation. She was also awarded the 2014 Eccles Foundation Writer in Residence at the British Library.