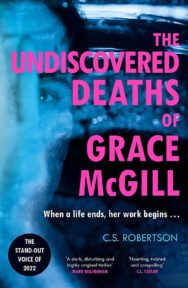 The Undiscovered Deaths of Grace McGill

‘One of the highlights of my reading year. A deliciously dark masterpiece‘ HELEN FITZGERALD

DEATH IS NOT THE END. FOR GRACE McGILL IT IS ONLY THE BEGINNING.

When people die alone and undiscovered, it’s her job to clean up what’s left behind – whether it’s clutter, bodily remains or dark secrets.

When an old man lies undetected in his flat for months, it seems an unremarkable life and an unnoticed death. But Grace knows that everyone has a story and that all deaths mean something more.

A former journalist, Craig Robertson had a 20-year career with a Scottish Sunday newspaper before becoming a full-time author. He interviewed three Prime Ministers, reported on major stories including 9/11, Dunblane, the Omagh bombing and the disappearance of Madeleine McCann. He was pilloried on breakfast television, beat Oprah Winfrey to a major scoop, spent time on Death Row in the USA and dispensed polio drops in the backstreets of India. His first novel, Random, was shortlisted for the 2010 CWA New Blood Dagger, longlisted for the 2011 Crime Novel of the Year and was a Sunday Times bestseller. He has been both longlisted and shortlisted for writing prizes. He now shares his time between Scotland and California and can usually be found on a plane somewhere over the Atlantic.