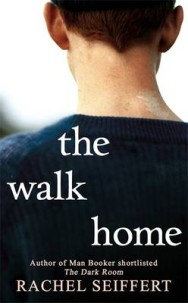 Stevie comes from a long line of people who have cut and run. Just like he has. Stevie’s been to London, taught himself to get by, and now he’s working as a labourer not so far from his childhood home in Glasgow …But he’s not told his family – what’s left of them – that he’s back. Not yet. He’s also not far from his Uncle Eric’s house: another one who left – for love this time. Stevie’s toughened himself up against that emotion. And as for his own mother, Lindsey …well, she ran her whole life. From her father and Ireland, from her husband, and eventually from Stevie too. This is a powerful novel about the risk of love, and the madness and betrayals that can split a family. If you cut your ties, will you cut yourself adrift? Rachel Seiffert is an extraordinarily deft and humane writer who tells us the truth about love and about hope.

Reviews of The Walk Home

Deftly drawn and perceptively observed Daily Mail Exquisitely pared down prose by a writer who really feels for her characters and the tainted lives they are living Glasgow Herald Captivating … further proof of Seiffert's enviable talents as a writer Daily Telegraph Intelligent and sophisticated … a sharp-eyed look at one corner of modern Europe in flux The Times Brilliantly compelling and powerful work, told in beautiful, lean prose The Economist Seiffert's writing is both tightly controlled and almost orchestral in its sweep. You feel every emotion deeply Irish Independent Deeply moving … As heart breaking as it is heart warming, this delicate and powerful novel will stay with you long after the final page Irish Examiner Seiffert has a superb ear for language … full of intelligence, heart and compassion Scotland on Sunday Unsparing, thoughtful and immaculately researched … Seiffert has a fine ear for Glasgow speech and an even better eye for images … a rich, nuanced portrait of a changing community … beautifully, sparely rendered Guardian The soul of The Walk Home, Rachel Seiffert's new novel, is its setting, Glasgow. The city's streets, housing schemes and tenement blocks provide not merely a backdrop, but history, colour and life Financial Times

Rachel Seiffert’s first novel, The Dark Room, was shortlisted for the Man Booker Prize and was made into the feature film Lore. She was named as one of Granta’s twenty Best of Young British Novelists in 2003, and in 2011 she received the E.M. Forster Award from the American Academy of Arts and Letters. Field Study, a collection of short stories, received an award from PEN International. Her second novel Afterwards was long-listed for the 2007 Orange Prize. Her books have been published in eighteen languages. After living in Glasgow for many years, Rachel Seiffert now lives in London with her family.