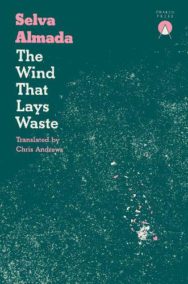 Home > Fiction from Scotland > The Wind That Lays Waste

The Wind That Lays Waste

The Wind That Lays Waste begins in the great pause before a storm. Reverend Pearson is evangelizing across the Argentinian countryside with Leni, his teenage daughter, when their car breaks down. This act of God – or fate – leads them to the home of an aging mechanic called Gringo Brauer and his young boy named Tapioca.

As a long day passes, curiosity and intrigue transform into an unexpected intimacy between four people: one man who believes deeply in God, morality, and his own righteousness, and another whose life experiences have only entrenched his moral relativism and mild apathy; a quietly earnest and idealistic mechanic’s assistant, and a restless, sceptical preacher’s daughter. As tensions between these characters ebb and flow, beliefs are questioned and allegiances are tested, until finally the growing storm breaks over the plains.

Selva Almada’s exquisitely crafted début, with its limpid and confident prose, is profound and poetic, a tactile experience of arid landscapes, heat, squat trees, broken cars, sweat-stained shirts, and ruined lives. The Wind That Lays Waste is a philosophical, beautiful, and powerfully distinctive novel that marks the arrival in English of an author whose talent and poise are undeniable.

Compared to Carson McCullers, William Faulkner, Flannery O’Connor, Sara Gallardo and Juan Carlos Onetti, Selva Almada (Entre Ríos, Argentina, 1973) is considered one of the most powerful voices of contemporary Argentinian and Latin American literature and one of the most influential feminist intellectuals of the region. Including her début The Wind that Lays Waste, she has published two novels, a book of short stories, a book of journalistic fiction and a kind of film diary (written in the set of Lucrecia Martel’s most recent film Zama, based on Antonio di Benedetto’s novel). She has been finalist of the Rodolfo Walsh Award and of the Tigre Juan Award (both in Spain). Her work has been translated into French, Italian, Portuguese, German, Dutch, Swedish and Turkish. This is her first book to appear in English (being published in collaboration with Graywolf Press, US).

Chris Andrews teaches at Western Sydney University in Australia. He was born in Newcastle (New South Wales) in 1962, and educated at the University of Melbourne, where he taught in the French department from 1995 to 2008. He has translated various books of fiction from Spanish to English, including Roberto Bolaño’s By Night in Chile, César Aira’s Ghosts, Rodrigo Rey Rosa’s Severina and Marcelo Cohen’s Melodrome. He is the author of two critical studies: Poetry and Cosmogony: Science in the Writing of Queneau and Ponge and Roberto Bolaño’s Fiction: An Expanding Universe. He has also published two collections of poems: Cut Lunch and Lime Green Chair.