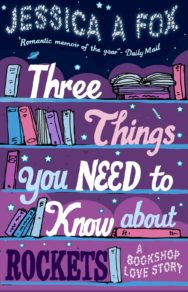 Three Things You Need to Know About Rockets

This is a book for anyone who has ever thought “What if?”

Jessica Fox is living in Hollywood, a 26-year-old filmmaker with a high-stress job at NASA. Working late one night, craving another life, she is seized by a moment of inspiration and taps “second hand bookshop Scotland” into Google…

The rollercoaster journey that ensues – taking in Scottish Hanukkah, yoga on Galloway’s West Coast, and a waxing that she will never forget – will both break and mend her heart. It will also teach her that sometimes we must have the courage to travel the path less taken.

Jessica Fox is a writer and film director. She has consulted for Harper Collins and was a resident storyteller and film director at NASA. Jessica’s films have been shown at both US and International film festivals. She heads Mythic Image Studios and divides her time between the US and the UK. Three Things You Need to Know About Rockets is her first book.