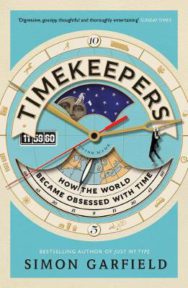 Home > History > Timekeepers: How the World Became Obsessed with Time

Timekeepers: How the World Became Obsessed with Time

Time flies like an arrow, but fruit flies like a banana. The Beatles learn to be brilliant in an hour and a half. An Englishman arrives back from Calcutta but refuses to adjust his watch. Beethoven has his symphonic wishes ignored. A US Senator begins a speech that will last for 25 hours. The horrors of war are frozen at the click of a camera. A woman designs a ten-hour clock and reinvents the calendar. Roger Bannister lives out the same four minutes over a lifetime. And a prince attempts to stop time in its tracks. Timekeepers is a book about our obsession with time and our desire to measure it, control it, sell it, film it, perform it, immortalise it and make it meaningful. It has two simple intentions: to tell some illuminating stories, and to ask whether we have all gone completely nuts.

Reviews of Timekeepers: How the World Became Obsessed with Time

Digressive, gossipy, thoughtful and thoroughly entertaining … Simon Garfield is an exuberant truffle-hound of the recondite and delightful factoid * The Sunday Times * Thoroughly enjoyable and illuminating … Stuffed with fascinating material * Observer * A sort of museum between hard covers. Timekeepers is as good as pop history gets * Sunday Express * Time well spent … Simon Garfield has made his name as an author who can spin fascinating narratives out of subjects that seem, on the face of it, narrow to the point of being dull * Financial Times * Scholarly but jokey, with a magpie's appetite for glittering trivia, Garfield is as eager to amuse as to inform, and achieves both * Telegraph * An eclectic collection of explorations of our relationships with time … Very readable * The Times * Delightful * Sunday Telegraph * Delightful … Gloriously funny … Garfield has an astonishing capacity for meticulous research and a wonderful ability to select the best stories to entertain us * Daily Express * Engaging … Engrossing * Mail on Sunday * In this book, brilliant cultural historian Simon Garfield assembles a host of intriguing characters who have tried to bend time to their own rules, and questions how we came to be ruled by something so arbitrary * Elle * Garfield's anecdotal, science-friendly book explores the tyranny of time and our desire to control it * Saga * There could be no better guide than Simon Garfield for this journey into time and its meaning for our lives. From the assembly line to the French Revolution, he covers the quirks of the clock with insight and wry enthusiasm. A riveting, educational read — DANIEL PINK, author of Drive

Simon Garfield is the author of seventeen acclaimed books of non-fiction including A Notable Woman (as editor), To the Letter, On the Map, Just My Type and Mauve. His study of AIDS in Britain, The End of Innocence, won the Somerset Maugham prize. www.simongarfield.com