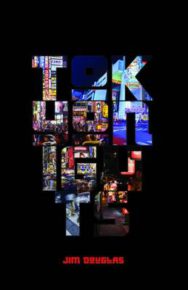 Charlie Davis, a modern-day heretic, ditches his past and rushes into a picaresque journey through the glistening nights of Tokyo and the desolate wilds of northern Hokkaido. But the past is not so ready to ditch him; wistful private investigator Colin McCann, hired to look into the death of a wealthy businessman’s daughter, has a few hard questions for Charlie and won’t give up until he’s got answers. And he’s not the only one on Charlie’s trail.Enter a world of empty orchestras, night butterflies, polite assassins, decadent TV celebrities and a pit-bull called Marvin. Tokyo Nights is a quest and an investigation into what we have become, a dark parable, a wake-up call to the dead 21st century obsessed with compromise, safety and longevity, and a novel that celebrates the excitement and energy of a culture like no other.

Jim Douglas is the pen name of two writers – Jim Hickey and Douglas Forrester.Jim Hickey was raised around Dublin and bruised and blessed into a reluctant maturity by boxing trainers and Christian brothers. Back in England, he attempted gentler pursuits such as studying the visual arts, writing poetry in a cottage that bordered the Humber river and going academic by getting a degree in English literature in Worcester.He took a job as a manager of a nature reserve in Easington, a hamlet of a river that blends into a sea with little fuss and looked after little terns, and deep into the North Sea that danced in grey murmurs from his caravan window.The terns flew away and the velvet revolution opened up a teaching opportunity in the former Czechoslovakia. He taught girls in a music academy how to pronounce Beatles’ songs.He then tried his hand at normality and growing properly up by workingas a civil servant in Burnley. Before long he was in Australia, deep in the bush and living with an Aboriginal tribe called the Noongars, officially employed as their teacher.Things came to a halt when he docked in Tokyo. Something ran out and another thing came in. Tokyo Nights is a novel spun from his eventual captivity, minorenlightenment and spots of contentment in Japan. It is a blessing and a sneer. He lives near enough and far enough from the metropolis and remains at pen on the second instalment of this book.Douglas Forrester was born and raised in Glasgow. He studied law in both Scotland and Amsterdam and spent the mid-summer months working as a grouse beater in the Highlands. After completing university, he worked for the Royal Bank of Scotland as a financial advisor before setting off for an expected short-lived sojourn in Japan.He never returned to the bank nor to law and began to forge out a career of kinds at the now defunct NOVA, where he was Jim’s boss, and then at an international school and several universities. During this time he became a fluent Japanese speaker. He was also an accomplished Shodo-Jaoanese calligraphy- practitioner and showed his work in a number of exhibitions as the only foreigner with work on display. He always had a keen interest in books and shared a passion for the work of Gavin Maxwell and R.L. Stevenson with his co-author. Their collaboration led to Tokyo Nights and is a cornucopia of their often very different experiences and impressionsof Japan’s capital city.Doug returned to Glasgow early in 2016 for medical treatment and to be with his family. He died in September 2016 shortly before the publication of this, his first novel.