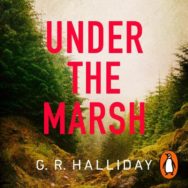 Home > Fiction from Scotland > Under the Marsh: A Scottish Highlands thriller that will have your heart racing

Under the Marsh: A Scottish Highlands thriller that will have your heart racing

Brought to you by Penguin.SHE NEVER CONFESSED. NOW SHE’S READY TO TALK.Twelve years ago DI Monica Kennedy caught the notorious serial killer Pauline Tosh, imprisoning her for life.When Tosh asks Monica to visit her at the remote Highlands Carselang prison, the detective thinks she’s playing games.But then Tosh hands her a hand-drawn map with a cross marking the desolate marsh lands near Inverness and Monica can’t ignore it – she was always convinced there were more victims out there.And when a body is discovered it looks like they’ve found a new name from Tosh’s kill list.But things are never that simple…(c) G. R. Halliday 2022 (P) Penguin Audio 2022

Reviews of Under the Marsh: A Scottish Highlands thriller that will have your heart racing

Deft characterisation, convoluted plot and more red herrings than the North Sea – Under the Marsh is a deft page-turner that doesn't disappoint. * Andrew Greig * An intriguing mystery that brings the Scottish highlands and those who live there vividly to life. I loved it. * Marion Todd * Chilling and breathtaking all at once, Under the Marsh grabs you by the throat from the off and it never lets you go. Stellar writing and GR Halliday's best yet. * Jonathan Whitelaw * Loved it. A fabulously atmospheric read. Thoroughly enjoyed the past and present strands that kept me guessing throughout. So cleverly done. There were many ways it could've gone but, the way it did, was such a satisfying end. * Deborah Masson * G.R. Halliday has created a wonderfully atmospheric and taut novel with UNDER THE MARSH. Perfectly paced and deliciously misleading, I was led down various different rabbit holes to find out what had happened, and to keep this level of intrigue is something so difficult now in this genre! Hugest congratulations. * L.V. Matthews *

G.R. Halliday was born in Edinburgh and grew up near Stirling in Scotland. He spent his childhood obsessing over the unexplained mysteries his father investigated, which has proved excellent inspiration for From the Shadows. The book was shortlisted for the McIlvanney Debut Prize 2019. G.R. Halliday now lives in the rural Highlands outside of Inverness, where he is able to pursue his favourite pastimes of mountain climbing and swimming in the sea, before returning home to his band of semi-feral cats. Dark Waters is his second novel.