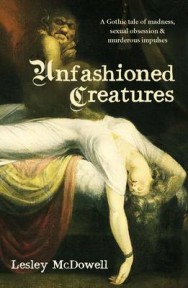 “Monstrously good.” – Louise Welsh. London, 1823. Mary Shelley’s real-life friend Isabella Baxter Booth is ‘disturbed in her reason’ – seeing ghosts and dependent on narcotics to escape a hellish life with an increasingly violent, deranged husband. Fearful of her own murderous impulses towards him, Isabella flees for her childhood home in Scotland, where she meets an ambitious young doctor, Alexander Balfour. He will stop at nothing to establish a reputation as a genius in the emerging science of psychiatry and he believes that Isabella could be the key to his greatness. But as his own torments threaten to overwhelm Alexander, is he really the best judge of which way madness lies?

'A meticulously researched gothic novel full of madness, ghosts and murderous desires. Lesley McDowell brilliantly evokes the tension between the scientific imagination and creative longings. Monstrously good.' – Louise Welsh, author of 'The Cutting Room'. 'Unfashioned Creatures – neatly captures the fevered menace of later 19th-century classics such as Wuthering Heights or indeed Frankenstein itself…These ghostly encounters are quietly chilling, and it's some compliment to McDowell that she succeeds so well in sweeping the modern reader into her world of pre-Victorian murk and superstition – As a psychological whodunit, Unfashioned Creatures keeps up the pressure, even beyond the final page. The novel has bigger ambitions, however. It puts early musings on identity and the self, alongside wider questions of gender, under the spotlight… Unfashioned Creatures is a finely worked and confident flight of Gothic fancy that stands up well to scrutiny in our cynical, self-analytical age. McDowell's ear for dialogue is already finely tuned and her handling of the contrasting narratives deftly judged – it's a tantalising read.' –Mary Crockett, The Scotsman. 'Set in 1823, when Mary Shelley's Frankenstein had become a bestseller, this novel imagines the life of Mary's real-life childhood friend Isabella Baxter Booth – Mary wrote about her as being 'disturbed in her reason', and Lesley McDowell makes this the premise for an exploration of madness and the prevailing attitudes to it in the 19th century, with a particular emphasis on the treatment of women deemed to be 'of unsound mind'. It is a rich historical context… McDowell maintains an engaging edge of ambiguity throughout. Apart from being a highly intelligent historical exploration of madness and our attitudes to it, this novel is also a compelling account of the developing relationship between a psychiatrist and a patient, in which the former comes to exert an extraordinary power over the latter, with disturbing consequences. McDowell's prose is dense but sharp, charged with urgency by her deep interest in her subject. As in Alexander Balfour's theory of madness, her passion for it in this novel is infectious.' –Brian McCabe, Herald Scotland. 'Unfashioned Creatures reads much like a novel of the time it is set; indeed, it is a novel that Shelley herself could easily have put her name to. Dealing with madness, murderous impulse and scientific obsession, it is Gothic literature to the core.' –Rebecca Dark, welovethisbook.com. '****' – -The List.

Lesley McDowell is a literary critic for The Herald, The Scotsman and The Independent on Sunday. Her first novel was The Picnic (2007). Her second book, Between the Sheets: The Literary Liaisons of Nine 20th-Century Women Writers, was shortlisted for the non-fiction prize in the 2011 Scottish Book Awards.