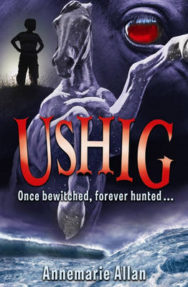 Ellen whistled again and repeated the old rhyme Aunt Marian had taught her. ‘I call you once. I call you twice. I call you three times over’. Surely in a place as beautiful as this, anything that answered her call was bound to be friendly. While exploring a small loch above the village of Aldhammer with her brother Davie, Ellen repeats a childish rhyme to call something to her. What arrives is an ancient being with the ability to shapeshift and the power to destroy. Ushig is a kelpie, a water wraith, and his intentions are anything but pure. Dragged into a dark, parallel world, inhabited by the creatures of Scottish legend, Ellen must pitch her wits against primeval magic. Can she outsmart the predatory Queen of the Night? And what does Ushig stand to gain? Another unique and gripping tale from Annemarie Allan, presenting an innovative spin on characters from Scottish folklore in a very modern manner. If you thought you knew the story of the kelpie – think again!

'This is a thrilling, contemporary and darkly beautiful adventure, with the power to touch the imagination of the most cynical of KS2 pupils. The themes covered include the fine line between courage and folly, and the even subtler one dividing good and evil, offering tremendous scope for philosophical classroom discussion.' — Teach Primary "In Ushig, we find a strong theme of love and loyalty and family values. They certainly puzzle the kelpie and prove in many ways more important and stronger than magic, a brave idea to push in today's society, where a fair number of readers will belong to families with less than perfect bonds. Ushig is the perfect, escapist, holiday read for 8-12 year olds.' — Suse Coon, Lothian Life 'Beautifully written, Allan has created an atmospheric fantasy world so compelling, I wanted to travel further into the hostile landscape and meet more of the strange and frightening mythical creatures that live there … Challenging and engaging with plenty to discuss, this would work well as a group or guided reader.' — Sally Harrison, Write Away 'This book is well written and well researched, leaving the reader eager to learn more about the legends that surely inspired it. The plot is fast paced and believeable. The changes in location flow together seamlessly to create an immersive world that is incredibly powerful. The main characters are easy to identify with, even the unusual ones, due to vivid descriptions of their thoughts and actions. Ushig remains an enigma throughout the story, always keeping his cards close to his chest, challenging the reader to determine which side he is on. Ellen is the true heroine, her strength; unusual heritage and ability to understand the strange world they have entered, aids her in remaining true to her goal of saving Davie and herself from the Queen of the Night and the wild hunt.' — School Librarian 'This was a really good book with a lot of detail and it explains the characters really well. It has an interesting storyline that makes you think something is going to happen and it turns around so something else happens instead. It is a bit of fantasy, but realistic enough to make you want to read on.' — Naomi Whitney, Castlebrae Community High, Teen Titles

Annemarie Allan studied at Stirling University and worked as a teacher and librarian near London. Returning to Scotland, she took up a post at the Scottish Arts Council, and started writing fantasy and science fiction for children in her spare time. She won the Kelpies Prize 2007 with her first novel, Hox, and was shortlisted for the Royal Mail Awards. Her second novel, Breaker, was published in 2009.