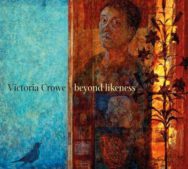 Victoria Crowe is one of the world’s most vital and original figurative painters. Her instantly recognisable work is represented in a large number of public and private collections. This extensively illustrated new book looks in depth at some of her own favourite portraiture. Looking at the psychology of her subjects and of herself in painting them, this is a fascinating book. Whether you are intrigued by the enigmatic stare of a psychiatrist, struck by the haunted eyes of an Auschwitz survivor or curious about the meaningful surroundings of her own self-portrait, this is an absorbing and enthralling read.Victoria Crowe lives in Scotland and Venice.

Julie Lawson is Chief Curator at the Scottish National Portrait Gallery, Edinburgh. She has curated numerous highly acclaimed exhibitions and is the author of previous books including A Shepherd’s Life: Paintings of Jenny Armstrong by Victoria Crowe (2000), John Byrne: Sitting Ducks (2014) and Graham Fagen / Douglas Gordon / Jackie Kay (2017). Duncan MacMillan is an art historian, art critic and writer. He is the author of numerous books, including Painting in Scotland: The Golden Age (Phaidon, 1986), Scottish Art in the 20th Century (Mainstream Publishing, 1994), Scottish Art: 1460-2000 (Mainstream Publishing, 2000) and Victoria Crowe (ACC, 2012).