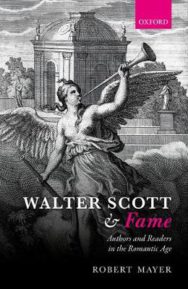 Home > Academic > Arts and Humanities > Walter Scott and Fame: Authors and Readers in the Romantic Age

Walter Scott and Fame: Authors and Readers in the Romantic Age

Walter Scott and Fame is a study of correspondences between Scott and socially and culturally diverse readers of his work in the English-speaking world in the early nineteenth century. Examining authorship, reading, and fame, the book is based on extensive archival research, especially in the collection of letters to Scott in the National Library of Scotland. Robert Mayer demonstrates that in Scott’s literary correspondence constructions of authorship, reading strategies, and versions of fame are posited, even theorized. Scott’s reader-correspondents invest him with power but they also attempt to tap into or appropriate some of his authority. Scott’s version of authorship sets him apart from important contemporaries like Wordsworth and Byron, who adhered, at least as Scott viewed the matter, to a rarefied conception of the writer as someone possessed of extraordinary power. The idea of the author put in place by Scott in dialogue with his readers establishes him as a powerful figure who is nevertheless subject to the will of his audience.Scott’s literary correspondence also demonstrates that the reader can be a very powerful figure and that we should regard reading not just as the reception of texts but also as the apprehension of an author-function. Thus, Scott’s correspondence makes it clear that the relationship between authors and readers is a dynamic, often fraught, connection, which needs to be understood in terms of the new culture of celebrity that emerged during Scott’s working life. Along with Byron, the study shows, Scott was at the centre of this transformation.

Robert Mayer was educated at the University of Michigan and Northwestern University. He is Professor Emeritus of English at Oklahoma State University, where he was for many years Director of the Screen Studies Program. He is the author of History of the Early English Novel: Matters of Fact from Bacon to Defoe and the editor of Eighteenth-Century Fiction on Screen. He has published numerous articles in such journals as Modern Philology, Eighteenth-Century Studies, Eighteenth-Century Fiction, ELH, The Seventeenth Century, and Quarterly Review of Film and Video. He lives in New Mexico and is at work on a study of the novelist Philip Roth, the poet Philip Levine, and the filmmaker Barry Levinson.