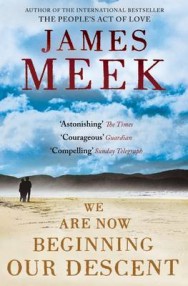 Home > Fiction from Scotland > We are Now Beginning Our Descent

We are Now Beginning Our Descent

At the dawn of the twenty-first century Adam Kellas finds himself hurled on a journey between continents and cultures. In his quest from the war-torn mountains of Afghanistan to the elegant dinner tables of north London and then the marshlands of the American South, only the memory of the beautiful, elusive Astrid offers the possibility of hope. With all the explosive drama of The People’s Act of Love, this is a spellbinding tale of folly and the pursuit of love from one of today’s most talented and visionary writers.

Reviews of We are Now Beginning Our Descent

* Astonishing. A love story that owes everything to the great collision of Osama bin Laden and Bush Jr's foreign policy. An intensely flavoured excavation of our times … wholly original. The Times * A brilliantly constructed contemporary novel, illuminated with wit and intelligence on almost every page. Daily Mail * Damnably hard to put down, with the momentum and trajectory of a well-aimed rocket. A book to keep one reading through the small hours. Terrific. — Jonathan Raban London Review of Books * A truthful and powerful novel about love, friendship and the struggle to be true in a world that has lost its grip on certainties. New Statesman * Compelling and admirable … Kellas is one of the more intriguing anti-heroes of recent fiction. — Matt Thorne Sunday Telegraph * Genuinely affecting. Sunday Times * Always readable, the book has pace and assurance. A highly intelligent novel and edgily contemporary. Independent * Conscientious and courageous. Guardian * We Are Now Beginning our Descent is really a love story, a fine successor to The People's Act of Love. Spectator * Meek has created not just an entertaining novel, but a valuable comment on some of the most contentious issues of our time. Irish Times * Partly a thought-provoking … meditation on writing, modern warfare and moral responsibility, it is also a poignant love story. — Katie Owen Sunday Telegraph 20090322 * Marvellous … interrogates its subject matter with intensity, seriousness and balance … An existential masterpiece. Guardian 20090328 * Supremely enjoyable and smartly written, with a scale that attempts not only to understand something about the world and the West's place in it, but something more timeless: men and their trouble understanding love. — Colin Waters Sunday Herald 20090412 * James Meek's novel is full of startling vignettes, caustic observations and fine black comedy. — Toby Clements Daily Telegraph 20090418 * Meek's terrific prose batters the notion of non-combatant neutrality with a couple of explosive set pieces … a terse, adrenaline-charged plot that punctures a fragile love story with uncomfortable questions about ideals and reality. — James Urquhart Financial Times 20090404 * He skilfully weaves a contemporary take on war, love and the demands of the marketplace on those who seek to be poets, not bards with his characteristic segueing from ont time and place to another, or one perspective to another, that keeps the reader on constant alert. — Lesley McDowell Herald 20090411

James Meek was born in London in 1962 and grew up in Dundee. We Are Now Beginning Our Descent is his fourth novel. His previous books include Drivetime (1995) and The People’s Act of Love (2005) which won the Royal Society of Literature Ondaatje Prize, the SAC Book of the Year Award, was longlisted for the Man Booker Prize and has been translated into more than twenty languages. He has published two collections of short stories, Last Orders (1992) and The Museum of Doubt (2000), which was shortlisted for a Macmillan Silver Pen award. He has worked as a journalist since 1985. He now lives in London. His reporting from Iraq and about Guantanamo Bay won a number of British and international awards. In the autumn of 2001 he reported for the Guardian from Afghanistan on the war against the Taliban and the liberation of Kabul.