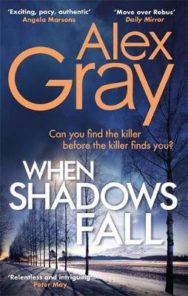 Home > Fiction from Scotland > When Shadows Fall: Have you discovered this million-copy bestselling crime series?

When Shadows Fall: Have you discovered this million-copy bestselling crime series?

‘Immensely exciting and atmospheric’ ALEXANDER MCCALL SMITH’Move over Rebus’ Daily Mail’Exciting, pacy, authentic’ ANGELA MARSONS’Convincing Glaswegian atmosphere and superior writing’ The TimesDiscover DSI William Lorimer – the series that has sold more than a million copies across the world.Whether you’ve read them all, or whether you’re coming to Alex Gray’s highly acclaimed series for the very first time, this is the perfect, page-turning read if you love Ann Cleeves, Val McDermid or Ian Rankin.DSI Lorimer is back with a brand new case. And the stakes have never been so high . . ._____________________When his old friend and former colleague is shot dead at his home, Detective Superintendent William Lorimer is devastated. And his problems are only just beginning. It’s not long before two further deaths are reported: both victims ex-policemen.It’s clear this is a targeted campaign against their own, yet with no other link between the victims to identify the killer, Lorimer’s police team are starting to panic. Who will be next?Lorimer knows he must keep his cool if he is to solve the case. But with time running out before the next attack, he’s struggling to ignore the sickening question at the back of his mind:Will he get to the killer, before the killer gets to him?_____________________WHAT READERS SAY ABOUT WHEN SHADOWS FALL’Alex Gray’s great crime fiction series is one you can pick up at any stage and not feel lost . . complex, intriguing, tense”A fast-paced thriller with lots of twists and turns”This series just gets better and better and everything still feels fresh. Highly recommended’

Reviews of When Shadows Fall: Have you discovered this million-copy bestselling crime series?

Relentless and intriguing — Peter May, bestselling author of the Lewis trilogy Cleverly constructed, this tightly plotted story is a gripping read. Highly recommended. * Mystery People * It's no wonder the series has sold a million copies to date . . . Alex Gray's latest is a thoroughly enjoyable read from a writer at the top of her game. * Dundee Courier * Terrific * Peterborough Telegraph * A hallmark of Gray's writing is the cosy familiarity of the characters and worlds she conjures, while deftly weaving in the essential components of a gripping psychological thriller – suspense, twists and searing imagery – that will have you whipping through its pages * Glasgow Herald *

Alex Gray was born and educated in Glasgow. She has been awarded the Scottish Association of Writers’ Constable and Pitlochry trophies for her crime writing and is the co-founder of the international Bloody Scotland Crime Writing Festival. Married with a son and daughter, she now writes full time.To find exclusive articles, reviews and the latest news about Alex Gray and the DSI Lorimer series, visit www.alex-gray.com or follow Alex on Twitter @alexincrimeland.