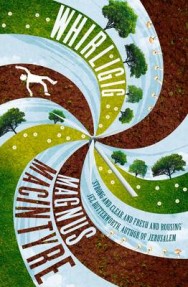 Claypole is not ‘a large man’. He is a fat man. A fat man with thin limbs, like an egg with tentacles. And life is not going well. He’s alone, idle, and on the brink of a medical crisis when a childhood acquaintance makes him an offer he can’t understand, can’t talk about, but ultimately can’t refuse. A week later, and he finds himself in the wilds of Scotland, plunged into an eccentric community at war over a wind farm. And he’s supposed to be a backer, but he has no idea what side he’s on, even though it may bag him a lot of money. All he wants is to look like a hero in front of the woman with the bright blue eyes who brought him here. To do so he must run the gauntlet of a family with many dark secrets, some dangerous hippies and their hallucinogenic potions, and the wilderness itself with all its threats and dangers. Whirligig is a raucous, joyous, often poignant comedy about the redemptive power of the countryside. Written with peerless wit, it’s a timely fable that takes its place within the tradition of the Great English Comic Novel. It’s The Wicker Man as told by P.G. Wodehouse.

"Whirligig has an impressively immersive sense of wry, often brilliantly dark involvement. Its voice is strong and clear and fresh and rousing. Like a bagpipe." – Jez Butterworth, author of Jerusalem

Magnus Macintyre grew up in suburban Oxford and rural Argyll, and then read History at Jesus College, Cambridge. He has been a serial entrepreneur in magazine publishing, film, television, and wind farming, with varying degrees of success. Only once has he had a proper job, as managing director of the New Statesman. He now lives in Somerset with Lucie and their two children, and writes full time. Whirligig is his first novel.