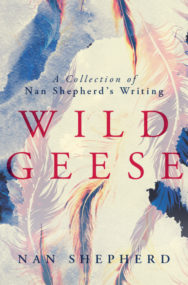 Her reputation grew exponentially with the 1977 publication of The Living Mountain, now regarded as a classic of landscape writing.

However, much of her work (including a short story, Descent from the Cross) was never published outside local magazines and journals, and are reprinted here in Wild Geese for the first time in book form. Some of her poems in this volume also appear here for the first time; they were found by Charlotte Peacock while researching her Nan Shepherd biography, Into the Mountain.

There are also some extraordinary examples of Nan’s nature writing in exponentially, which can now be seen to contain the seeds of the writing which flowered in The Living Mountain.

Wild Geese will be enjoyed by every one of Nan Shepherd’s huge and growing readership, and will no doubt also provide a signpost to all her other works now available.

Nan Shepherd was a Scottish Modernist writer and poet. She was an early writer in Scots, who wrote three stand-alone novels set in small, fictional communities in North Scotland. The Scottish landscape and weather played a major role in her novels and provided the focus for her poetry.