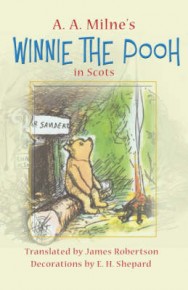 By (author) A. A. Milne; Translated by James Robertson; Illustrated by E. H. Shepard

Yin day, when Christopher Robin and Winnie-the-Pooh and Wee Grumphie were aw haein a crack thegither, Christopher Robin feenished whit he had in his mooth and said lichtsomely: ‘I saw a Huffalamp the-day, Wee Grumphie’.’Whit wis it daein?’ spiered Wee Grumphie.’Jist lampin alang’, said Christopher Robin. ‘I dinna think it saw me’.’I saw yin wance’, said Wee Grumphie. ‘At least, I think it wis a Huffalamp’.’But mibbe it wisna’.’Sae did I’, said Pooh, ‘wunnerin whit like a Huffalamp wis’.’Ye dinna see then that aften’, said Christopher Robin in an affhaund wey.’No noo’, said Wee Grumphie.’No at this time o the year’, said Pooh.First published in 1926, “Winnie-the-Pooh” is one of the classics of children’s literature. Pooh Bear, Piglet, Rabbit, Owl and all the other creatures of the Forest need no introduction. The Pooh books have been translated into many languages all over the world, and now Winnie-the-Pooh gets his first outing in Scots.Following on the huge success of Itchy Coo’s Scots translations of Roald Dahl’s books, James Robertson’s version of “Winnie-the-Pooh”, complete with the original Ernest Shepard illustrations, is a warm and charming rendition of this much-loved tale, which will delight both bairns and adults alike.

James Robertson is the General Editor of Itchy Coo and a contributing author to many Itchy Coo books. He translated Roald Dahl’s Fantastic Mr Fox as The Sleekit Mr Tod in 2008. He also writes for adults and has published three novels, including the bestselling The Testament of Gideon Mack which featured on the Richard and Judy Book Club in 2007.