Ahead of Edwin Morgan's centenary on the 27th April 2020, we bring you a BooksfromScotland celebration of the great poet, playwright, essayist and translator. If you've not come across Edwin Morgan's work before, we hope this taster will inspire to discover more - and there's a lot of great work available! If you'd like to find out about the official Edwin Morgan Centenary events, which will be beginning on the 27th, please visit the Edwin Morgan Trust website. 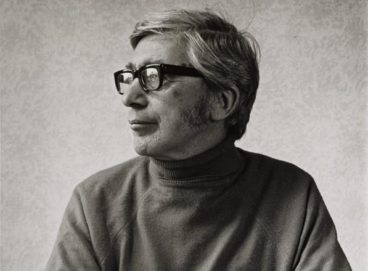 Alistair Braidwood has been a fan of Edwin Morgan and his work since he was a teenager, here he tells us why Edwin Morgan means so much to him and why we should investigate his brilliant work.

Feature portrait taken by Jessie Ann Matthew and belongs to the National Galleries of Scotland.

James Kelman, Liz Lochhead, Alasdair Gray, Tom Leonard, Janice Galloway, Iain Banks – these are just a few writers who made me realise at a formative age that people like me, mine, and those around me, belonged on the pages of books, and that our culture and language was legitimate. This is hopefully beyond any reasonable argument today, but even in the dying embers of the 20th century it was much less certain. Those named above did as much as any to challenge and change the situation, but before them all there was Edwin Morgan.

The first poem of his I read was ‘In The Snack-bar’. Not many lessons from my less than comprehensive education have stayed with me, but just thinking about it transports me to that snack-bar with the sights, sounds, and smells that Morgan evoked so powerfully. The desperate plight of the blind man with his ‘dismal hump’ and face hidden, the voyeuristic nature of the onlookers, and the decidedly uncomfortable relationship between young and old, contrasting hope for the future with resignation approaching defeat – Morgan captured the picture perfectly with the keen eye of someone invested in the lives of others however, and wherever, he finds them. It takes something special to grab the attention of a 14-year-old for whom poetry till that point was little more than a song lyric or amusing graffiti on a toilet wall, but here it was and Morgan and his poetry would never leave me.

Charming, challenging, intellectual yet intimate, humorous and humble, his work is all of those things and more, inspiring widespread adoration and devotion for a poet that is rare. I have fo...

Beyond the Last Dragon: A Life of Edwin Morgan

James McGonigal’s brilliant biography of Edwin Morgan gives great insight into the poet’s life and work. Here we extract a section on Edwin Morgan’s childhood that shows how some of his artistic preoccupations were formed early on.

Extract taken from Beyond the Last Dragon: A Life of Edwin Morgan By James McGonigal Published by Sandstone Books

GROWING UP IN GLASGOW

EM’s parents were united in matrimony and the family business from 1915 onwards. There was a gap of five years before their only son was born. This may have been because of the turmoil of war and the loss of family members. Madge Arnott’s older brother, George Arnott, was killed on 1 July 1916, fighting as a private with the Highland Light Infantry at Serre, one of the fortified villages held by the Germans at the start of the Battle of the Somme. He was 28 years of age, and EM kept his service meda...

In Touch with Language

‘This image of the great dark industrial city blazing with a source of simple widespread pleasure – something childlike in the enjoyment, yet something fitting in the extravagance of the display – is …

‘She made her face up like it was an art.’

‘A hauntingly beautiful, moving and imaginative poem about the first day of the  afterlife, it comes after the glossary because by then readers should already have learnt enough to navigate their way …

‘feelin in his banes able to dree the darg and the downie for the life that’s worth it aa.’

Imagine a Country: Ideas for a Better Future

Lee Randall Reviews: We Are Attempting to Survive Our Time

‘Compassion is Kennedy’s strong suit. Throughout this collection she traces psychological cracks to their sources, engaging our empathy.’