A Man Passing Through by Gordon Jarvie

An Autobiography in Poetry

Loosely chronological, Gordon Jarvie’s A Man Passing Through (comprising about half the poems of a consistently productive career) is his autobiography in poetry. It is a wry, witty and insightful collection, gathering together the various strands making up an ordinary life – family, writing, birdwatching, holidays and climbing, growing up, growing old, and everything between. Below is a short selection.

A Man Passing Through: Memoir with Poems, Selected and New
By Gordon Jarvie
Published by Greenwich Exchange

the Cambo herons stand like sentries
all along Balcomie’s cold and rocky shore.

the fishing can’t be half bad
if they stand here morning, noon and late.

Grey and sleek and pointy
they never disappoint, eh?

They loiter with intent
their fish-hunger to vent.

They’re languid yet so focused
on their next meal, like the locust.

The privilege, the thrill
to watch them stand so still.

Mankind, the moral midgets –
we are the frantic fidgets.

I stand and look upon a grey North Sea.
Bird-watching makes me peckish:
it’s nearly time for my tea.

for Sally and Frances

We ducked low branches, tripped on hidden roots,
the snow lay thick enough to call for boots.
But sun came slanting at us through the trees
while wind had dropped to silent puffs of breeze.

The scene was something out of Robert Frost
or Tolstoy: a glistering pinewood of the lost.
Subconsciously we listened for sleigh-bells
coming at us from across white Grampian hills.

That’s when we heard it – high up in the sky
an eerie mewling yelp to make blood thrill
and then the answering call from further up the hill.

Eagles or buzzards? Well, we couldn’t see
for trees, but then at last we found a bit of sky
and saw two soaring, gliding – too far away, too high.

Do you remember, Miranda, when the hiker at the lonely B&B
was charged one and sixpence for his breakfast and high tea
as he walked the Connemara coastline in 1963?

Do you remember when a bottle of Guinness
(price: eleven old pence) was thrown in for a nightcap?
‘Drink it down, there’s a good chap, for a right good nap.’

When a chipped cupful of rawest firewater poteen
induced a heavy dream-filled sleep of eighteen
lost hours, snug in an ancient armchair by the fire?

for which they paid him a welcome Gaeltacht grant?
Or are these just tall stories from the olden times
à la Marco Polo, Mandeville et al? I wonder. 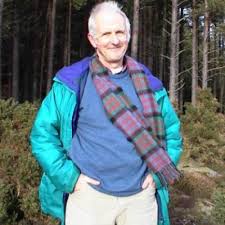 Gordon Jarvie was born in Edinburgh and educated at Trinity College Dublin and the University of Sussex, where he gained an MPhil in 1968. He has worked as a teacher and editor at Purdue University in the USA, as well as for publishers such as Collins and Oxford University Press.