Rupert Wolfe Murray hitched into the roof of the world in 1986, where he hustled to find work, stayed in slums, overcame his fear of travelling alone, and spent a month on a horse. Rupert’s article reveals three key Scottish connections between his Tibet adventures and his new book, 9 Months in Tibet, which he is currently promoting by cycling around the Highlands and Islands.

From Scotland to Tibet

Last month I launched my memoir about living in Tibet. It’s called 9 Months in Tibet and is about my search for a job on the roof of the world as well as a series of treks, adventures, horse rides and disastrous love affairs. People say it’s funny, I got a foreword from Alexander McCall Smith, and the best news is that teenagers like it.

What’s all this got to do with Scotland? You might be wondering.

There are three Scottish connections to this book: the first chapter is about getting away from Scotland; the book was published by one of Scotland’s newest publishing companies (Scotland Street Press) and I’m promoting it by cycling around the Highlands and Islands. 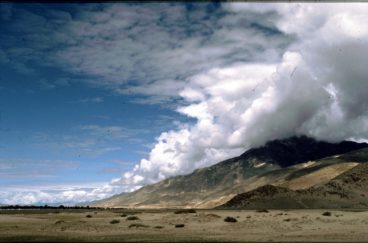 Getting Away from Scotland

Most travel books I have come across say little about the difficulty of getting away. They tend to start in some exotic location and the assumption is that the author had no problem in overcoming his fear or getting the money together. This creates the impression that travel writers are somehow superior to the rest of us who struggle with fear of travelling independently, not to mention a lack of cash.

I vividly remember my fears, as well as my complacency, and consider myself lucky for getting away at all. I discuss this issue in the book and here is an extract from the first page of 9 Months in Tibet:

“We lived in a white house on the Firth of Forth, the estuary just north of Edinburgh…

One day I was standing on the sea wall when my elder brother Kim turned up. He had left school under a cloud of bad behaviour a year earlier and had gone to France and Switzerland. We hadn’t heard from him in ages but we knew from occasional letters that he had learned French and got some work.

There he was, standing in front of me with a big grin on his face. The thing that impressed me most was his jacket: elegant, dark grey and beautifully designed. It had thin red piping along the seams and a large unusual collar which looked like it could be wrapped round your neck in a blizzard. There was no sign of luggage, just a small leather bag.

– Where d’you get the jacket? I asked.

– Switzerland. It’s a postman’s jacket. I was thrown out of Switzerland for working illegally. I’m home.

To me this was the definition of cool. This was someone with courage. How could I be like him? How could I get out of this place? The idea of travelling abroad on my own was scary. I just didn’t have the courage to do it. I had never jumped into the unknown to such an extent and – worst of all – I didn’t know how to overcome this fear of travelling alone.”

I’m keen to talk to people about these issues, help them discover the joys of independent travel and even conquer fear. When I give talks or readings I share my experiences of Tibet and always ask people what their independent travel plans are. 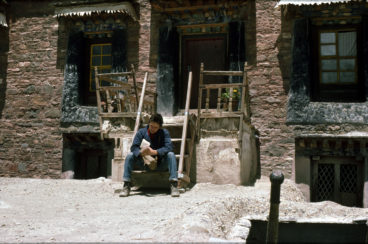 The Highlands and Islands

I didn’t want to launch my new memoir in Edinburgh, Glasgow or any of the big cities down south and my publisher, Jean Findlay, agreed. Instead of trying to get noticed at the Edinburgh Book Festival I decided to launch 9 Months in Tibet at the Belladrum Rock Festival near Inverness and promote it in the Highlands and Islands.

Scotland Street Press is small and new and not laden with cash reserves for promotional tours and the only way to do this was by bike. For the last few weeks I’ve been cycling around Inverness, Ross-shire, Sutherland, Caithness and the Orkneys – sleeping in a tent, cooking over a small gas stove and carrying up to 12 books on my bike-trailer.

The reception has been encouraging. Bookshops in Dingwall, Kirkwall, Dornoch and Inverness bought copies; I sold two in the pottery in Cromarty, 21 at the Belladrum Rock Festival, about 10 in Sutherland and scores more to all sorts of people I met on the road (including a bike mechanic, a cleaner, an art dealer, a writer, an MP and a merchant banker). I told BBC Radio Orkney that I was probably the only author who had delivered books to The Orcadian Book shop by bike.

The most unexpected thing that has happened to me on this bike tour was a realisation that Sutherland looks a bit like Tibet. Before getting to Tibet I assumed it was just high mountains and steep gorges, as that’s what’s shown in the photo books. But Tibet is actually a huge plateau with mountains visible round the edges, on the horizon. The actual Himalayan mountain range is in the narrow strip of land on Tibet’s southern border with India and Nepal. The main feature of Tibet is its height – the plateau is over 4,000 metres high.

When I cycled up through Sutherland, from Lairg to Altnahara, I rose up from the glens and forest that make up most of the highlands and found myself on a vast open moor that stretched out to the distant horizon. The wide open spaces and the lack of people reminded me of Tibet, as did the atmosphere. I delight in the wilderness, become aware of all the hidden life there, and never feel lonely in it. To be able to ride through this environment in the name of writing feels like a great privilege.

Rupert Wolfe Murray will be cycling around Scotland until November 2016. If you would like to invite him to give a talk please send him an email (wolfemurray@gmail.com) or call him on 0747 138 1973.

9 Months In Tibet, by Rupert Wolfe Murray, is out now published by Scotland Street Press (PB, £12.99)