Danny Scott, children’s author and goalkeeper for the Scotland Writers F.C., reveals what it’s really like to play football matches overseas. He finds that it’s not the results that matter but the shared team experience.

Travels with the Scottish Writers F.C. 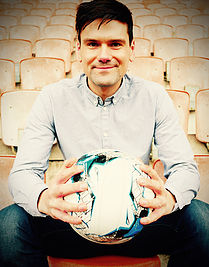 It’s not the winning and losing that counts, it’s the stories.

Football isn’t a matter of life and death. Don’t be ridiculous. It is beautiful, however. Forget Ronaldo’s spray on tan, Rooney’s wages and players’ writhing about on the ground like salted slugs to get their fellow professionals sent off. Remember, instead, Zidane’s volleyed goal at Hampden in the 2002 Champion’s League final – a goal so beautiful that former chief sports writer at the Guardian Richard Williams refuses to watch television replays of it to preserve his memories of seeing it live. Remember, instead, Archie Gemmil’s impudent dribble and goal against Holland at World Cup ’78 – an act of such fluidity and grace that it has been adapted for modern dance.

Beauty is everywhere in football. Sometimes you just need a lifetime to attune your eyes to it.

Many of us who are obsessed the game had a guide when we were young. Someone who sat us down on a couch or stadium seat and equipped us with the tales we needed to know of our club and country’s greatest moments. This matters. One’s enjoyment of any sport increases proportionally with your knowledge of the stories surrounding each player or team.

All that said, football’s position as the world’s most popular sport still perplexes some. On average there are over 50 scores a game in basketball, and six in rugby union and league. In football the average is 1.5. Perhaps, as Chris Anderson and David Sally argue in The Numbers Game, this is part of its appeal. Goals become rare moments of beauty or transcendence where a pub or living room can erupt in a focussed moment of pure joy. Arguably, it’s the patient melancholy a football fan must develop that attracts so many writers to the sport. They know how long it takes to create magic. It could be why baseball has traditionally been the writers’ sport of choice in the US.

In fact, there are enough writers-cum-football-lovers across Europe to form several international football teams of writers. I play in goal for one of them: Scottish Writers FC. We play in Scotland’s World Cup 1986 strip because a large proportion of writers’ football is an unashamed act of childhood wish fulfillment.

I first heard of the team in 2012 when working on the inaugural Book Week Scotland. To mark the week, Scottish writers invited their English counterparts, who already had an established team, to play on a frozen November pitch in Glasgow. Scotland won 4-2. Radio 4 made a documentary about the match. Our country’s national writers’ team was off to a great start.

Since those auspicious beginnings, the squad has grown, and travelled Europe. I made my own debut in autumn 2013 for an international double-header against Sweden in Gothenburg, and Austria in Vienna the following weekend.

The match in Gothenburg was the first overseas adventure for Scottish Writers and anticipation levels were high. So high, in fact, that a giddy set of players indulged in a couple of ‘looseners’ the night before the game with the Swedish captain egging us on, assuring us that his team would be doing the same at the Gothenburg Book Fair. They probably weren’t.

Match day arrived and the tall Swedish team made up for their unexpectedly fresh and fit appearance by presenting us with a piper in full military regalia to play the national anthems. Inspired by the bizarre experience of belting out ‘Flower of Scotland’ to bagpipes as Swedish dog walkers and teenagers stared at us, we raced to a 1-0 lead. Yass. International writers’ football suited us. Had the match ended there we would be bucking the trend of our county’s overseas footballing misadventures. Only it didn’t end there and we were walloped 9-2 by a fitter, more organised, and better team.

And yet, that first away weekend contained so much that is good about writer football. After attending to our astroturf burns back at the hotel, we came together upstairs at a wood-panelled Irish bar to share stories. High on victory, the Swedes were particularly beguiled by our midfielder-cum-Gaelic-poet Pàdraig MacAoidh’s reading, hearing their own history in the old language.

Others shared their work before we mixed the teams to sit down and eat a buffet including delicious lobster – not usually on the menus of Irish bars in Scotland. And despite the emotional and very real physical pain of loss, we had a great night. 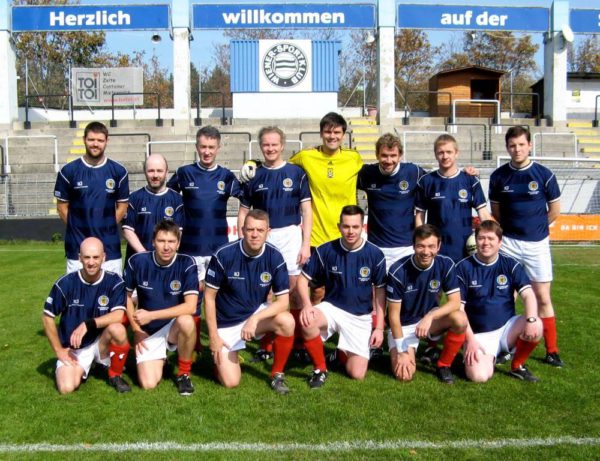 A handful of days later, the team dusted itself down, welcomed some new players to the matchday squad, and waltzed to a 3-1 victory in Vienna at an actual football stadium, before clearing the pitch so an U14 girls’ game could start. We had our first overseas victory and no-one could take that away from us.

A 2014 trip to Rome has followed since then and the team will travel to Barga in Tuscany, a town with strong Scottish links, for our third match versus the Italians, this September. The Azzurri are desperate for revenge following our famous 2-1 victory in Edinburgh last year – a result that sent shockwaves around the world of writers’ football.

But in many ways, it’s not the winning or losing that counts in writers’ football – even if it does make the weekend that wee bit more enjoyable. Writing is a solitary pursuit and football is anything but. And so it follows that the best part of any international weekend is always the coming together in the evening to share stories and poetry about football and life. The magic lies in making connections with writers in other countries around the love of a game we played in different streets as children, sharing the same dream that we’d one day score a goal for our country.

Danny Scott is the author of Scotland Stars F.C., a series of six football-filled chapter books for readers aged 6-8 from Discover Kelpies (PB, £5.99 each). The final hat-trick of books in the series  –Calum’s Hard Knock, Calum’s Tough Match and Calum’s Cup Final – are published on 18 August 2016. He is also a goalkeeper for Scottish Writers F.C.. Follow him on Twitter @ASimpleDan.