The Art Of A Shepherd’s Life

‘To contemplate the shepherd is to reflect upon a person and a way of life left behind by progress or change.’

A Shepherd’s Life centres on Jenny Armstrong, born in 1903 at the farm of Fairliehope, who spent her life working as a shepherd in the Pentland Hills. In a series of remarkable paintings made over twenty years, Victoria Crowe, one of Scotland’s foremost painters, paid tribute to the life and work of this exceptional woman. Here the authors, Julie Lawson and Mary Taubman, introduce two seminal landscapes: Jenny Armstrong’s rugged Pentland Hills and Victoria Crowe’s powerful paintings.

Exract from A Shepherd’s Life: Paintings of Jenny Armstrong By Victoria Crowe
By Julie Lawson and Mary Taubman
Published by National Galleries of Scotland

Artists who explore the theme of a shepherd’s life and landscape could be seen to relate to a tradition that has itself been a constant in Western art and thought. To contemplate the shepherd is to reflect upon a person and a way of life left behind by progress or change. The tending of sheep in its slow rhythms is a scene to console and reassure us when society is rapidly changing. The ‘Pastoral’, from Virgil and Ovid to Handel and Wordsworth, is the genre that has provided artists with the means of contemplating the mythical origins of society, the development of civilisation, and the relationship of man to nature. In the ‘ideal’, Italianate Arcadian landscape, exemplified by the paintings of Claude (1604­­–1682), the shepherd represents the innocence of our early human condition, living a life of contented – if limited – rustic simplicity, tending his sheep in an essentially benign nature. This image was transformed, but not forgotten, in the nineteenth century by painters like Jean-François Millet (1814–1875). He depicted workers on the land in a way that gave the repetitive and physically exhausting tasks they perform the significance of a religious ritual. The shepherd was transformed from exemplar of innocence to that of tenacity and stoicism in nature conceived as a place of moral challenge. Millet’s paintings of the French peasantry are symbolically potent statements about the cycles of nature, life, death and regeneration. He depicts the Christian shepherd, the shepherd of wild places, tending flocks in the harsher realities beyond the Alps. It is not a huge imaginative journey from Millet’s France to twentieth-century Scotland, whose terrain is also often cold and inhospitable. 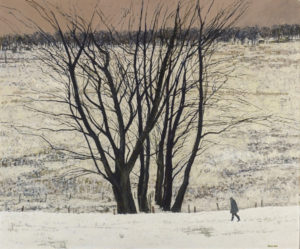 The landscape of broken moorland and hills surrounding her home was to have a major impact on Victoria Crowe. She talks of ‘the enormity of the sky, the ever-present wind, long winters, and hills bitten into with snow and ice, and the long light of summer days and nights’. How, as an artist, was she to put that to use? Characteristically, she stood back from it for a while, watching and absorbing it. Eventually a time came during her children’s early years (her son Ben was born in 1973 and her daughter Gemma in 1976) when, conscious of a dearth within herself of inventive energy, she turned to the strange new landscape and began to record it.

Her approach to the landscape was more than a mere prosaic investigative exercise. Filled with that spirit of place which means so much to her, the pictures resulting from her quest in themselves make up an important section of her oeuvre. They mark also a noteworthy stage in her development as an artist. Increasingly, she became fascinated by the extent to which the look of a landscape arises from what goes on in it and her pictures began to include signs of the animal and human life which contribute so much to its form and texture. First, footprints in the snow crop up in one painting; in another, a distant figure appears in the shape of a tiny silhouette – at first glance seeming hardly more than a scale indicator but soon recognisable, to those who have ever seen her, as the unmistakable form of Jenny Armstrong traversing the inhospitable terrain with a loping stride. This distant shape, at once impersonal cypher and specific personage, sparks a tension that shimmers across the picture’s vast landscape, creating an atmosphere of grandeur ringed with menace.

A Shepherd’s Life: Paintings of Jenny Armstrong by Victoria Crowe, by Julie Lawson & Mary Taubman, is published by the National Galleries of Scotland priced £9.95. It is available to purchase from their shop.