‘There, on the opposite side of the track, was the tiger from which we had just had the fortunate escape.’

The illegal trade in wildlife generates billions of dollars in illicit profits to organised crime groups and networks. Until 2011 John M. Sellar was the most senior law enforcement official operating transnationally to combat these cruel activities. In this extract John’s close encounter with a tiger in one of India’s premier reserves takes on considerable poignancy given that, just a few years later, these magnificent animals were utterly eradicated from the area by poachers.

Anxious as I was to get out of the situation, I understood that none of us wished to do anything to prompt an attack. And so, we remained silent and utterly still. Then I noticed that the bushes between which the tiger was positioned were apart around its body and rear quarters but had grown together somewhat in front of it. To reach us, it would have to press forward through a few tangled and thorn-strewn branches. The same thought appeared to have struck the magnificent creature too as, with a final dismissive but aggressive tooth display and hiss, it backed out of position, turned and strode slowly off. It showed not the slightest alarm and its retreat was roundly dignified as if to show us that it had decided to change direction but that the choice had nothing at all to do with us. 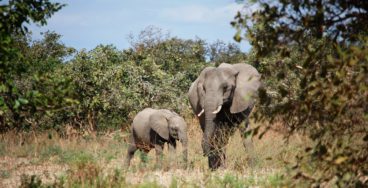 This young elephant, photographed in Zimbabwe in 2011, may not be alive today. Whole families of elephants have been slaughtered there during 2013, some of them when they drank water at water holes poisoned with cyanide.

Nervous smiles and quiet laughter broke out within the jeep and we began to congratulate each other, not just on the most amazing sighting, but also on avoiding what could so easily have become a very nasty incident. It was agreed that a stiff drink would be appropriate and we decided to head back to our base. The manager turned the jeep and we swept back to the track in a semi-circular manoeuvre. However, as we swung up and onto the trail again, the manager once more brought the 4×4 to a sudden stop. There, standing about 15 metres away in a small group of trees just off to one side of the track, stood a large sambar deer stag. This is a large species of deer and, when fully grown, individuals are similar in size to the red deer found in Scotland’s mountain and forest areas. The voice of the Project Tiger director came from the rear. ‘Why isn’t it moving off?’ I, too, was puzzled by the deer’s total lack of reaction to our sudden appearance. Instead of looking at us, the deer had its head turned almost completely around, seemingly staring back over its left shoulder. 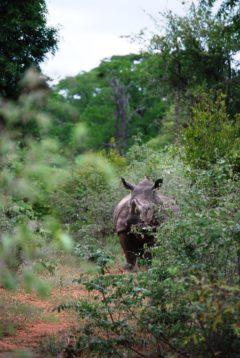 Moments after he clicked the shutter, this rhino charged at the author. Fortunately, it was a bluff and he lived to tell the tale (and write this book).

We all followed its gaze. ‘My God,’ whispered the reserve manager. ‘Can you see it?’ There, on the opposite side of the track, was the tiger from which we had just had the fortunate escape. Its eyes were firmly fixed on the deer. It was crouched down in a semi-stalking and semi-attack posture, with its ears pressed down and back in what I understand is a clear sign that it is about to spring. The four humans and two animals were mesmerized by each other. I think one of us in the jeep probably said something too loudly because the sambar’s head swung round in our direction, as if finally becoming aware of our presence. 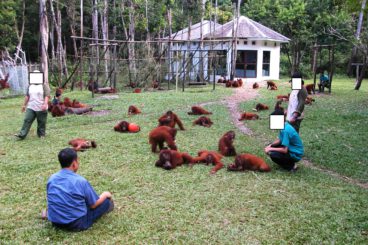 These are just a few of the almost 1,000 orangutans in rescue centres in Indonesia in 2006. Several had been kept as pets by corrupt government, military or police officials. Deforestation, often through illegal logging, means there is not enough jungle left for these youngsters to ever be returned to the wild.

And in that split second the tiger reacted. Aware of the deer’s distraction, the tiger covered the ground between them in just a few bounds. Its speed was breathtaking and the deer never had a chance. Its head did begin to swing round again but too late, far too late. Just before the gap finally closed, the tiger leapt up and its claws closed around the lower neck and shoulder area of the deer. Its teeth, which had, less than two minutes before, been bared in warning at us, closed around the back of the sambar’s neck. We were so close that we could hear the crunch as the tiger’s jaws bit down onto its prey, followed quickly by an almost gunshot-style crack as the deer’s spine was broken. The deer collapsed and, motionless apart from some twitching of its limbs, appeared to have been killed instantly. The tiger lay down alongside the felled prey and kept its jaws firmly in place. As it did so, its eyes swivelled towards us and low growls emerged from its throat, as if to caution us to mind our own business and not interfere. It need not have worried; there was no way I was getting out of that jeep until it was parked beside human habitation.

A full minute seemed to pass before the tiger appeared satisfied that dinner was ready and that the deer was dead beyond doubt. Rising up, it moved its feet so that it was astride the deer and, keeping its teeth clamped where they had been from the moment of interception, it began to move forward dragging the carcass beneath it. I wondered whether there was to be no end to these astounding sights; it was amazing that a tiger could haul an animal larger than itself in what was, while not effortless, nonetheless an impressive display of strength. The tiger and its prize slowly disappeared from view into the vegetation of the forest. The human observers remained silent. I think each of us was wondering whether what we had witnessed had really happened right in front of our eyes. Finally, the Project Tiger director broke the silence and told me, as if I needed telling, that I had just viewed the most remarkable spectacle. He went on to say that, in forty years of service in the forests of India, he had never been so close to a tiger kill.