‘The battle between the two young men had become a publication war, not unlike the Internet spats of our own time.’

The trial, and subsequent hanging, of Thomas Aikenhead is the focus of this chilling insight from Heather Richardson into how sex, drugs and blasphemy came together in a heady, and ultimately toxic, mix in 17th-century Edinburgh.

In April 1682 a young woman called Elizabeth Edmonstone was accused of the near-fatal poisoning of one Jonet Stewart after giving her a tablet reputed to inflame female sexual passion. The two women lived in the house of the advocate William Dundas, but they were at opposite ends of the social spectrum – Jonet was a servant, and Elizabeth the daughter of the Laird of Duntreath. She was a friend of Dundas’s daughter, and a guest in the house.

The aphrodisiac was the brainchild of a down-at-heel Edinburgh apothecary, James Aikenhead. According to the court records a male servant came to his shop and bought some of the tablets, acting on Elizabeth’s orders. She gave the aphrodisiac to Jonet, telling her it was a sweetmeat. Poor Jonet became dangerously feverish, suffering for twenty days before a doctor’s intervention saved her life. 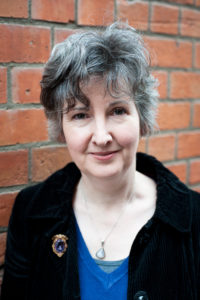 It’s unclear who decided to pursue a prosecution in this matter, but we can probably assume that then – as now – it wasn’t a good idea to get on the wrong side of a lawyer. Mr Dundas may have taken exception to the poisoning of his servant, and determined to call the perpetrator to account. Regardless of who was the driving force, Elizabeth, the hapless male servant and James Aikenhead appeared before the Privy Council. They were found guilty, with a recommendation that they be made an example of. James Aikenhead seems to have come off the worst of all the guilty parties. Within a year of the trial he was dead, bequeathing nothing but debts to his widow and children. One of those children was Thomas Aikenhead, who would come to have his own unhappy place in the in the legal records of Scotland.

When I was struggling to find a way to begin writing my novel, Doubting Thomas, I decided to write a short story based on the aphrodisiac episode from the point of view of the doctor who saved Jonet’s life. The real doctor in the case was middle-aged, successful and very much an establishment figure in Edinburgh – in other words, of no interest at all – so instead I allowed a fictional doctor to emerge. Dr Carruth was young, ambitious and upwardly mobile, but with a painful sensitivity to the nuances of class and status. As I wrote the story I allowed the febrile mood of the time to feed into the creation of the six-year-old Thomas, who Dr Carruth encounters while seeking the cause of Jonet Stewart’s illness. My aim was to develop a character who would fizz with energy and curiosity, absorbing the zeitgeist with all the hunger of a precociously bright child. This short story grew to such an extent that Dr Carruth and his wife Isobel became central to the whole novel.

Fast-forward fourteen years from the aphrodisiac incident, and Thomas Aikenhead was in prison, charged with the capital offence of blasphemy. As he awaited trial he petitioned for the charge to be set aside, claiming he’d been led astray by his freethinking friend, Mungo Craig. The petition was rejected, and while Thomas languished in the Tolbooth prison, Mungo struck back by publishing a pamphlet listing Thomas’s many blasphemous utterances. 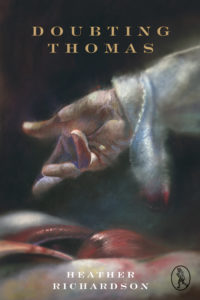 The cover of Richardson’s forthcoming novel

The trial was a speedy two-day affair, with the guilty verdict delivered on Christmas Eve 1696. On the morning of January 8th 1697 Thomas made the journey from the Tolbooth to the Gallowlee on the Leith road. He had prepared a long speech, but became rambling and confused as he tried to read it out on the scaffold. Luckily he had had the foresight to write down and make several copies of it, which he enclosed in a final letter to his friends and asked them to circulate. In it he accused Mungo of being just as guilty of blasphemy as he was. A week later Mungo retaliated with another pamphlet – in the 17th-century, pamphlet publication was a quick and relatively cheap way of criticising, proselytising and accusing. The battle between the two young men had become a publication war, not unlike the Internet spats of our own time.

We know what happened to Thomas Aikenhead – after his death he was buried at the foot of the Gallowlee. Mungo disappeared from the historical record, although it was hinted that he’d travelled to the north of Ireland and thrown his lot in with the Presbyterians there. One person who emerged relatively unscathed was Elizabeth Edmonstone. Five years after being found guilty by the Privy Council she married James Montgomery of Greyabbey, a member of one of the most prominent and wealthy planter families in Ulster. They went on to have nine children, so maybe her husband was even better at inflaming female sexual passion than Aikenhead senior’s ill-judged tablets…

Doubting Thomas by Heather Richardson is forthcoming in October from Vagabond Voices priced £11.95.

‘As a painter, Hill wanted to record this moment because he knew it was monumental; he knew history …

A Pilgrim’s Guide to Iona Abbey

‘St John was revered by the Celtic monks for his emphasis on mystical contemplation.’