‘One of the most striking similarities between Edinburgh and Reykjavik is the collective spirit of the country’s passion for literature.’

Mapping the many parallels between Edinburgh and Reykjavik as literary cities with prestigious UNESCO heritage, this article by Rebecca Raeburn at Edinburgh UNESCO City of Literature Trust, traces how unique landscapes and cultural traditions shape both capital cities today.

Nestled in the very hearts of Scotland and Iceland, you will find two of the world’s Cities of Literature: Edinburgh and Reykjavik. Edinburgh became the first City of Literature under UNESCO’s Creative Cities Network in 2004, with Reykjavik following suit seven years later. Both cities are steeped in history and surrounded by remarkable landscapes, and as the capitals of their respective countries, they have been home to some of the world’s best-loved authors and stories. Writers such as Sir Walter Scott, J.K. Rowling, Gunnar Gunnarsson and Arnaldur Indriðason, have sprung from the beds of these cities, playing their own part in creating lasting legacies. 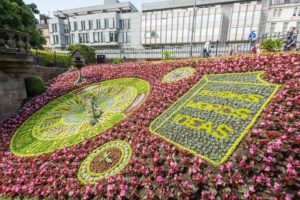 The Floral Clock in Edinburgh

Kristín Viðarsdóttir from Reyjkavik City of Literature spoke about the literary connections between our two cities:

‘Our literatures have crossed paths through the ages as have our people and our languages. We can trace our connection to the very settlement of Iceland, as many of our ancestors came here from the British Isles. One of them was Audur the Deep-Minded, who lived in Scotland before settling here.  She was the only Viking woman known to have led an independent expedition to Iceland. This connection continues: Walter Scott translated Eyrbyggja Saga in 1814, writer Sölvi Björn Sigurðsson translated Robert Burns’  ‘Tam o’ Shanter’ in 2014 – just two examples out of many.’

Like Edinburgh, Reykjavik boasts an outstanding literary history, enriched by its invaluable heritage of ancient medieval literature, particularly the Sagas written from the 13th century onwards, including texts such as the Book of Icelanders, Kings’ Sagas and the Poetic Edda. These texts, like the Bannatyne Manuscript compiled in Edinburgh in the 16th century, are the foundations upon which both cities have built their literary traditions.

The literary heritage of both Edinburgh and Reykjavik plays a central role within their modern urban landscape to this day, as contemporary writers, poets, and festivals continue to bring them vitality and identity. Like Edinburgh, Reykjavik has its own literary festival, the biannual Reykjavik International Literature Festival, which attracts numerous acclaimed authors from around the world, with past guests including Margaret Atwood, Haruki Murakami, Roddy Doyle, Kurt Vonnegut and A.S. Byatt.

Sjon and Ása of Reykjavik @ EIBF

In speaking about the exchange of writers from Reykjavik and Edinburgh during both festivals, Kristín Viðarsdóttir wrote:

‘Two of our best known authors, Sjón and Yrsa Sigurðardóttir, are among recent guests in Edinburgh, and Reykjavík has had the same fortune, as we have welcomed writers such as Ian Rankin and Edinburgh Makar Christine De Luca to our literary city – Christine De Luca was a featured author at the 2017 International Literary Festival this fall. We look forward to many more visits from writers from our sister City of Literature, and continued literary crossings in the future.’

Perhaps one of the most striking similarities between Edinburgh and Reykjavik is the collective spirit of the country’s passion for literature; the way in which it reaches the everyday resident. Every year in the months leading up to Christmas, a flurry of Icelandic books are published in what is called the jólabokaflód – translated as the ‘Book Flood Before Christmas.’ This is just one example of the way in which the people of Reykjavik dedicate themselves to the promotion of literature, specifically new literature, with book readings, events in cafes, bars, libraries and bookshops.

It is a city too where its very streets come alive with literature, especially in the commemoration of its past and present authors. The statue of Reykjavik poet Tómas Gudmundsson is portrayed sitting on a bench in Reykjavik’s Hljómskálagarður Park, reminiscent of Edinburgh’s statue of poet Robert Fergusson, who is depicted walking down the Royal Mile with book in hand, very much a part of today’s society. This sentiment is championed in both cities, and has led to the creation of literary inspired neighbourhoods like Nordurmýri and Neighbourhood of the Gods, the House of Halldor Laxness – a museum dedicated to the writer’s memory – as well as bookshops, publishers, libraries and other literary attractions in Reykjavik. 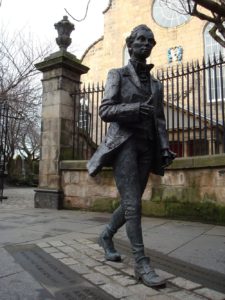 Edinburgh and Reykjavik are known around the world for many things, but we believe that literature strengthens them both as an undeniably important part of their histories and their futures. Our Creative Cities Network connects cities all over the world in their work towards a common objective: to foster international cooperation with and between cities committed to investing in creativity as a driver for sustainable urban development, social inclusion and cultural vibrancy.

This article is by Rebecca Raeburn, Communications Assistant at Edinburgh UNESCO City of Literature Trust.

‘Anne introduced me to many fantastic Scandinavian treats. Her Glogi (Finnish mulled wine) was the b …