Thorfinn The Nicest Viking is an action-packed series by David MacPhail for young readers who love Horrid Henry and Diary of a Wimpy Kid. Here David MacPhail reveals what books he’ll be gifting this Christmas, and we’ve got details of a fantastic giveaway, where 4 lucky readers can win a copy of Thorfinn The Nicest Viking And The Gruesome Games! Read on for more details…

At last, they found an excellent spot: flat and sheltered and near a river.

Velda went off to collect wood, while Thorfinn rushed to set up the camp. Oswald fell flat on his back and threw his arms out, shouting, “Ohh, my poor tootsies!”

Within half an hour Thorfinn had rigged up a large tent, made a fire and built a roasting spit, from which he hung a kettle.

They sat warming their feet by the fire and drinking tea. Percy flew down and perched on Thorfinn’s shoulder.

“Ahh! What an excellent holiday this is,” said Thorfinn.

Suddenly, their definitely-NOT-a-holiday was interrupted by a WHOOSH of air past their ears. An arrow embedded itself into a nearby tree: 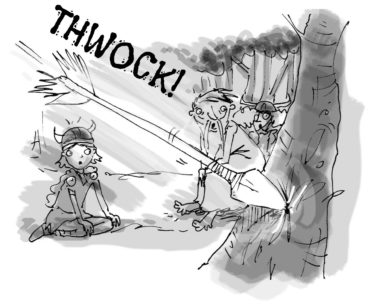 Percy squawked and took to the air just as a group of fierce-looking men emerged from the bushes. They had long braided hair, thick beards, and wore reddish-coloured tartan kilts. One of them was pointing a bow and arrow at Thorfinn and his friends.

The man at the front was huge and muscly with a thick mane of red hair.

“I am Ranald MacRanald, chieftain of Clan MacRanald, otherwise known as The Red Wolf. Who are you?” he growled. 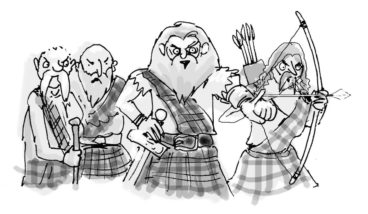 Oswald spoke first, jabbing a finger at the man with the bow. “You could have had my eye out with that thing, young man!”

“Fire another one at the auld codger!” said Ranald.

“OHH, you’re going to be sorry you did that,” said Velda. “SOOO sorry.” She whipped out her axe.

“Oh yes, little girl,” said Ranald, knocking the axe from her hands with his huge sword. “And why’s that?”

Velda stood her ground. “We’re Vikings, and you don’t mess with us.”

“In fact, this boy is the son of our chief Harald the Skull-Splitter. You’ve probably heard of him.”

There was more excited chatter among the clansmen:

Ranald turned to his men and rubbed his hands.

See, I told you, we can be at least as tough as the Vikings. At least!”

Thorfinn stepped in front of Ranald and took off his helmet. “Now that we’re all acquainted, could I offer you and your men a cup of tea?”

The Scots stared at Thorfinn’s kettle like it was a rat sandwich.

“Tea?” said one of them. “Is that what Vikings drink?”

“Is that their secret? Does it make you tougher?” asked another.

“Should we be drinking tea?”

“Don’t be daft! He’s playing with us. Vikings don’t drink tea,” said Ranald. “I have a plan. We’ll take them back to the castle and ransom them.”

Two men grabbed Velda. She kicked, and screamed at them. “Oh, you’re going to be SOOOO sorry! When Harald finds us, he’ll chop you into little bits! He’ll mince you and stick you in a curry!”

Thorfinn, on the other hand, was brimming with excitement as they dragged him away. “Oh, a castle! I love castles. Sadly most of the castles I see get burnt to the ground. I’d rather like to see one that wasn’t.”

Ranald’s men pushed their three captives into the forest while Percy followed overhead. They walked about fifty metres before Oswald started complaining about his feet again, then another fifty before he demanded to be carried.

Ranald sighed. “Silly old fool!” He prodded one of his men. “Winkie! Carry him!”

If anything, Winkie was even older, scrawnier and more decrepit than Oswald.

“Whit? I’m no’ carrying him!” the man protested.

“Shuddup and get on with it!”

Winkie was a good name for this old fossil. He had a gurney, screwed-up face and blinkie eyes.

He staggered and gasped as Oswald leapt onto his back. “You’re a ton weight, auld man!”

“Rubbish! I live on a diet of raw cabbage and apples.” To make his point, Oswald let loose a colossal FART. “See?” 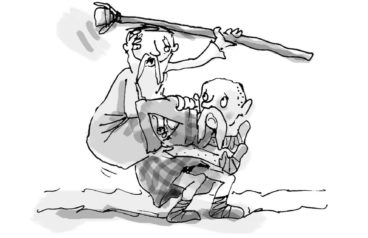 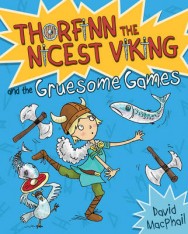 n collaboration with Floris Books, we’re running a fantastic giveaway where 4 lucky readers can win a copy of Thorfinn The Nicest Viking And The Gruesome Games! All you need to do is answer the following question:

Which of these gruesome games would you be champion of and why?

Enter via our poll on Twitter (@scottishbooks) launching on the afternoon of Monday 27th November or by emailing editor@booksfromscotland.com with your answer. The deadline is 2pm on Monday 4th December. Good luck! 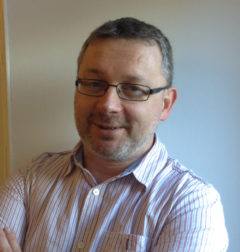 David MacPhail left home at eighteen to travel the world and have adventures. After working as a chicken wrangler, a ghost-tour guide and a waiter on a tropical island, he now has the sensible job of writing about yetis, Vikings and ghostly detectives. At home in Perthshire, Scotland, he exists on a diet of cream buns and zombie movies. David is also the author of Yeti on the Loose and the Thorfinn the Nicest Viking series and Top-Secret Grandad and Me: Death by Tumble Dryer. Here he reveals his ScotBookFlood picks…

No child could fail to be engrossed by An Illustrated Treasury of Scottish Mythical Creatures by Theresa Breslin and Kate Leiper. Treasury is absolutely the right word here – with lively, engaging text and beautiful illustrations, it really is a keepsake, one that will remain a favourite on a child’s bookshelf for many years.

My second choice is Silver Skin, by the estimable Joan Lennon. Set in stone age Orkney, it’s a fabulous blend of science fiction and history, two of my favourite genres. My nephew, who is 13, will love it.

‘I drew a little bit from Scandinavian folklore. I have some Norwegian family so that helps.’

What Publishers Are Gifting For Christmas

For ScotBookFlood Publishing Scotland’s members reveal what books they’ll be gifting this Christmas.