‘The 8 skaters skooshin were unashamedly a homage to Henry Raeburn’s iconic painting.’

Acclaimed author and translator Susan Rennie introduces The Twal Days o Yule and traces the linguistic origins of some of the words used, from bonnie doos to lassies birlin, in her Scots version of the much-loved Christmas song.

There have been a myriad merry versions of ‘The Twelve Days of Christmas’, since its first known appearance in the 18th century. Some early versions have ducks a-quacking, hares a-running and bells a-ringing for the gifts, and even a juniper tree substituting for the pear. But what gifts should appear in a distinctively Scottish version, using Scots words and rhymes throughout? Some of the gifts in Twal Days were chosen for their wonderful sound and alliteration in Scots, some for their visual potential for a picture-book, and others for their links to Scottish culture and tradition – or ideally all three!

The terms Yule and Yuletide have been used in Scots since the Middle Ages to refer to the festive period, and their roots lie in the name of the Old Norse festival jól. An earlier Scottish version of the ‘Twelve Days’ rhyme was called ‘The Yule Days’ and featured in Robert Chambers’s Popular Rhymes of Scotland (1842). In this version, Yule lasts for thirteen days (up to and including 6th January), and the gifts are sent by the King to his lady and include some very exotic creatures: a papingo, the old Scots word for ‘parrot’, and even an Arabian baboon!

The King sent his lady on the first Yule day, A papingo-aye;
Wha learns my carol and carries it away?

Tempting as it was to revive the venerable papingo, I decided to use a native bird for my chorus. The lead actor in Twal Days is therefore the reid robin, who sits in a rowan tree – chosen partly of course for the alliteration, and partly because the rowan tree has long been a symbol of good fortune in Scotland, and would therefore make a braw Yuletide gift. Reid robins and robin reidbreists have featured in Scots literature for centuries, and the phrase as reid as the rowan is a traditional simile dating back to medieval Scots.

For the second day of Yuletide, there are bonnie doos instead of turtle doves. Doo is a very old Scots word for a dove or pigeon, and the phrase bonnie doo is also a traditional term of endearment, which fits in bonnily with the theme of the rhyme. The earliest known English version of the rhyme has ‘four colly birds’, where colly is an English dialect word for ‘black’, related to ‘coal’. The name of the Scots collie or sheep-dog is thought to have the same origin, from the black patches on its coat – so in Twal Days there are 4 collie dugs (helpful for rounding up the sheep-a-shooglin who appear on day 7). 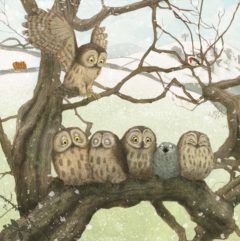 It is thought that the original ‘Twelve Days’ rhyme may have come from France, and several of the Scots words in Twal Days have a French origin. The word hoolet is familiar from its eerie role in Tam o’ Shanter (‘Kirk-Alloway was drawing nigh, Whare ghaists and houlets nightly cry’), but it has been used in Scots since the Middle Ages and comes from the medieval French hulotte. One medieval Scots poem includes the wonderfully alliterative howland howlattis (‘howling owls’) – which is not too far from my modern 6 hoolets hootin. However, the ‘3 French hens’ of the rhyme switch nationality in Twal Days to become Scottish tappit hens – the Scots term for a hen with a distinctive tuft of feathers on its head. (In Scotland, a tappit hen also humorously refers to a decanter with a fancy top that looks like a tufted hen.)

On day 9, I have lassies birlin rather than ladies dancing, but some 19th-century versions have ‘ladies spinning’, so I am in good company there. Birl is a surprisingly modern word, having appeared in Scots in the 18th century. It is probably onomatopoeic in origin, like whirl or burr – or indeed skirl and dirl ‘reverberate’, which is what the pipers and drummers do on days 11 and 12. The words dirlin and skirlin are partly chosen for their rhyme – and there is a nod to Scots literary tradition, too. In Tam o’Shanter, Auld Nick famously ‘screw’d the pipes and gart them skirl, Till roof and rafters a’ did dirl.’ The Scots verb skirl has been used to describe the sound of the bagpipes since at least the 17th century. It is also used for the sizzling sounds of frying – hence the name skirlie for a dish of fried oats and skirling-pan, the evocative Scots name for a frying pan. (Fans of Roald Dahl might spot a resemblance to the BFG’s word sizzle-pan, here too!) 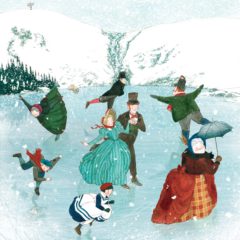 I strayed a wee bit further from tradition on days 7 and 8; rather than swans-a-swimming and maids a-milking there are sheep a-shooglin and skaters skooshin. The 8 skaters skooshin were unashamedly a homage to Henry Raeburn’s iconic painting of ‘The Skating Minister’– an image which the illustrator, Matthew Land managed to suggest brilliantly. 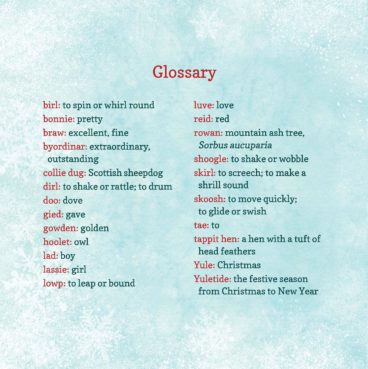 Check out author, Susan Rennie, who reads an extract from her Scots version of the classic Christmas song, with beautiful illustrations by Matthew Land in this video.

The 12 Days o Yule is a stunningly illustrated Scots version of the traditional Christmas rhyme. Journey through the twelve days of Yuletide with a cast of skaters skooshin, lassies birlin, sheep a-shooglin and the all-important five gowden rings. The book by Susan Rennie, with illustrations by Matthew Land, is out now published by Floris Books priced £5.99.

Susan Rennie lectures on the history of Scots and lexicography at Glasgow University. A renowned Scots language expert, she is a co-founder of Scots language publisher Itchy Coo and author of several Scots language books for children. She has translated several classic children’s books into Scots including The Tiger Who Came to Tea and We’re Going on a Bear Hunt.

Check out Floris Books on Facebook for details of an exclusive discount code which runs until 14 December.

Die, My Love by Ariana Harwicz

‘The questions asked that Christmas perforated me with more force than hunters’ bullets.’

GeoBritannica: On People and Landscape

‘A few decades after Union, numerous market towns were planned and (re)built.’