‘Raised in the Scottish Highlands, Mary Watts was a symbolist artist-craftswoman whose political activism increased dramatically in later life.’

This book explores the creative partnerships of Mary and George Watts and Evelyn and William De Morgan: Victorian artists, writers and suffragists. Raised in the Scottish Highlands, Mary Watts (née Fraser Tytler, 1849–1938) was a symbolist artist-craftswoman and designer for Liberty’s whose political activism increased dramatically in later life. Author Lucy Ella Rose delves into Watts’ important art and activism below…

This book explores the interconnected creative partnerships of Mary and George Watts and Evelyn and William De Morgan: Victorian artists, writers and suffragists. It demonstrates how these figures worked, individually and together, to support greater gender equality and female emancipation. The Wattses’ Surrey studio-home became a meeting place for leading artists, writers and feminists of the day. Raised in the Scottish Highlands, Mary Watts (née Fraser Tytler, 1849–1938) was a symbolist artist-craftswoman and designer for Liberty’s whose political activism increased dramatically in later life. 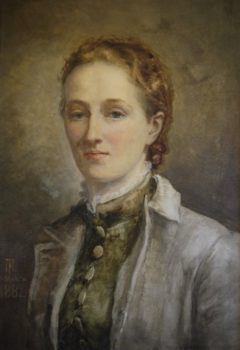 Although Surrey was ‘rather slow to make its mark on the suffrage campaign’ (Crawford 2006: 186), significant suffrage artists and leading suffragettes resided in the Surrey Hills (especially Peaslake) where they also sourced flints for their window-smashing campaign. Peaslake was home to important campaigners including the Brackenbury sisters, artists who painted Emmeline Pankhurst’s portrait and led the pantechnicon raid on Parliament in 1908; Inverness-born, Slade-trained artist and militant suffragette Marion Wallace Dunlop, first of the hunger-strikers (1909); and Emmeline and Frederick Pethick-Lawrence (Overton and Mant 1998). Mary, a figurehead of non-militant feminism in her community, convened at least two suffrage meetings in Compton: her friend, fellow craftswoman and suffragist Gertrude Jekyll (Vice-President of the Godalming Women’s Suffrage Society) attended a suffrage meeting held by Mary at ‘Compton Picture Gallery’ (Festing 1991: 210); and a newspaper article of 1913 reports a large suffrage meeting and supper held at Limnerslease by her invitation (‘Women and the Vote: Last Night’s Meeting’, Surrey Advertiser, 29 November 1913). She thus drew political as well as artistic activity into the domestic sphere, transforming her studio-home into a suffragist meeting ground. Her presidential address on the position and potential of women is recorded:

Mrs. Watts said that with respect to the movement their common-sense side asked what are women going to get by the vote? Their higher side asked what are women going to give for the vote? The qualities which mankind had agreed to describe as feminine were love, faith, purity, and tenderness. A vote meant a voice, a voice to be heard by the State, whether in the making of new laws or in the reforming of old laws, and the millions of British women in asking for the vote were asking the State to allow them to bring to its counsel, their contribution of those higher [feminine] qualities. In answer to the question which many people were putting as to whether women would be strong enough to do this she quoted the following verse:

So nigh to grandeur is our dust,
So nigh to God is man,
When duty whispers lo! thou must,
The soul replies, I can.

Mary’s affirmative answer (in verse) to the earnest question of whether women were strong enough to be law-makers marks her role as a confident and respected suffragist leader and visionary. Her authoritative educational and presidential positions, as well as her attendance at rousing lectures by influential women in Surrey in 1891 (see Chapter 4), made her fit for this role. While Mary advocates the utilisation of ‘feminine qualities’ in the campaign and insists the state needs women’s virtuous influence (in accordance with the NUWSS), her concluding allusion to the famous final lines from Ralph Waldo Emerson’s military-themed poem ‘Voluntaries’ (1863) – which pays tribute to male volunteers prepared to sacrifice their lives in another fight for freedom – seems more suited to a speech addressed to militant suffragettes than to moderate suffragists. This call to arms couched in poetry suggests her more radical suffragist stance and sympathy with aspects of – perhaps even inclination towards – militancy in later life.

Mary’s stance at this time may have been influenced by suffragettes’ adoption of more militant tactics in their struggle for enfranchisement, strengthened by the recent death of suffragette Emily Wilding Davison (nearby in Epsom, Surrey, where the Wattses married), and driven by the ongoing imprisonment and forcible feeding of suffrage campaigners; the ‘Cat and Mouse Act’ was also passed in 1913. Although the NUWSS publicly disavowed militant methods the year before Mary became President of the Godalming branch, by 1913 she may have been inspired by the renewed energy, excitement and force of early twentieth-century feminism as well as the increasingly radical discourse of the NUWSS in the Common Cause of November that year, which included war and military metaphors (Tickner 1989: 211–12). She was perhaps losing patience with peaceful and orderly suffragism in the face of women’s sustained political oppression, and starting to see milder militancy as a necessary stimulant (perhaps a moral and political duty) after decades of effort devoted to a cause she had supported for a quarter of a century. In light of George’s view that ‘all rebellion, though its extremes may shock us, is a movement, a struggle towards reform’ (1887: 27 January, 29 April), Mary may well have shared the growing suffrage ‘spirit of rebellion when it springs from intolerable injustice’ and ‘brutality of the government to women’ (Votes for Women, 28 November 1913:

Lucy Ella Rose is Lecturer in Victorian Literature at the University of Surrey. Her collaborative doctoral award from the University of Surrey and Watts Gallery supported her research on neglected women in nineteenth-century creative partnerships. A leading Mary Watts scholar, Rose has worked extensively on the Mary Watts archive at Watts Gallery and assisted the transcription of her diaries. She presents and publishes on Victorian literature, art, culture and feminism.

What International Women’s Day means to some of the Floris Books’ team and authors, and what they’re …