A Taste of Scotland’s Islands

PART OF THE The Guestlist ISSUE

‘The taste was and is exquisite, unlike any other honeys I have tasted. Nuanced and floral, the texture is rich, creamy and unctuous. I was hooked over breakfast and could not wait to find out more about this honey’s provenance’

Although Edinburgh is busy and buzzing throughout August, you may want to escape to the calm of Scotland’s islands, just like Sue Lawrence who shares her culinary highlights from her island travels. And when the food is as good as she says . . .

When you attend a book festival as an author, you are invariably given a goody bag, something to look forward to with anticipation. Sometimes you find a book, a pen, a scarf or even some whisky. But without doubt, one of the most welcome gifts I have received as an author was at the Colonsay Book Festival in 2017. There in my bedroom at the Colonsay Hotel was a jar of the island’s honey. What a nice touch, I agreed with my fellow authors, and thought nothing more of it until the following morning when the same honey appeared on the breakfast table. The taste was and is exquisite, unlike any other honeys I have tasted. Nuanced and floral, the texture is rich, creamy and unctuous. I was hooked over breakfast and could not wait to find out more about this honey’s provenance.

Andrew Abrahams has been producing Isle of Colonsay Wildflower Honey for some four decades, a labour of love that he fits in between his many other jobs, including that of oyster farmer. Andrew lives at the Strand, right at the south end of Colonsay opposite the small tidal island of Oronsay and has beehives – some 50 to 60 – all over both islands. His bees are a strain of the native black bee, whose hardiness means they are able to harvest on cool, sunless days and even in a strong wind.

When I asked Andrew about the distinctive, complex flavour of his honey, he summed it up perfectly by telling me it is ‘the essence of all the flowers on Colonsay’. There is a lot of heather in it – and unusually there is both ling and bell heather. Most heathers in Scotland grow on moorland; on the island, however, they also grow on rocks and this gives a different flavour to the honey. There are also wild thyme, clover, sea pinks, hawthorn and many more flowers growing on the sandy machair and on the moors of Colonsay.

The honey is harvested once a year, usually in September, and then comes the process of extracting the honey from the wooden frames of honeycomb. Honey is extracted by centrifrugal force, usually radially. However, given the high proportion of heather, those honeys with the specific consistency that Andrew’s have are extracted tangentially instead. They are then potted into jars and labelled with a picture of the Celtic cross representing Oronsay’s fourteenth-century priory. 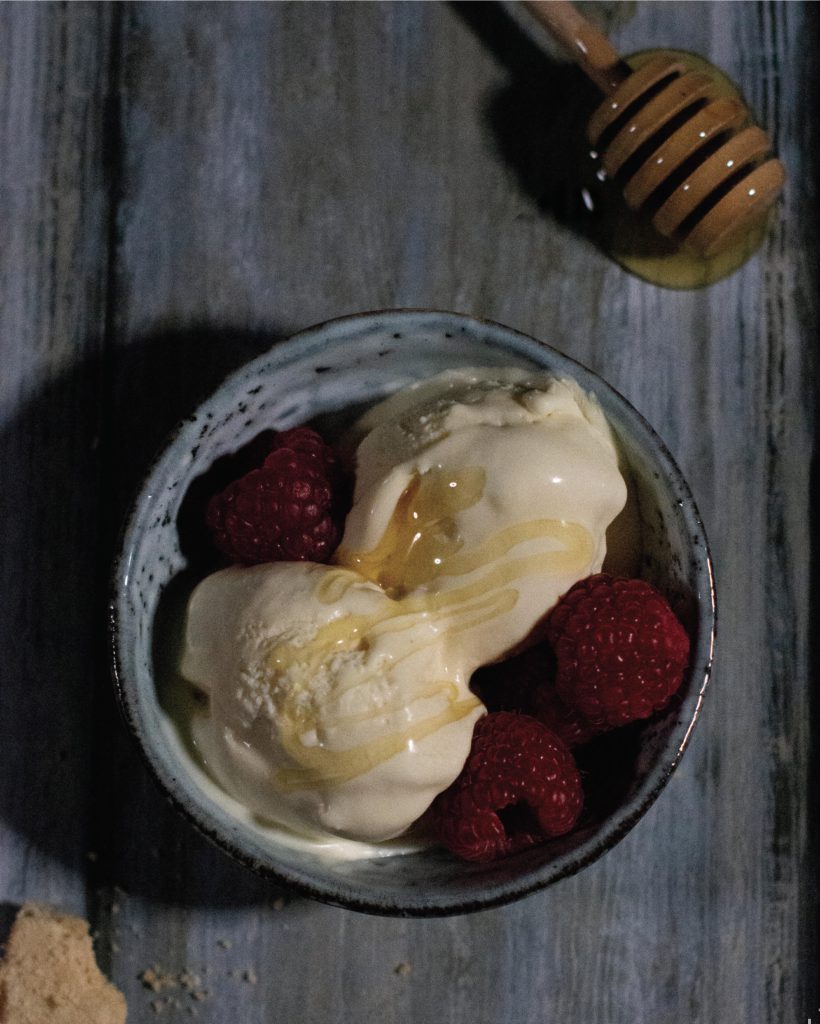 When asked how he likes to eat it and if he has any particularly recipe using honey he would like to share, Andrew insists you mustn’t mess about with it. Apart from serving it with ice-cream where it is simple enough to retain the pure honey flavour, he says why eat it with anything other than on a simple piece of bread or toast. In times past on the Scottish islands, honey was eaten with bannocks made of beremeal or oats (and sometimes rye) and it was used as a sweetener in that harvest-time pudding, Cranachan, made from hedgerow brambles, crowdie and toasted oats. There are also some old recipes that predate the arrival of sugar to Scotland, in rich game dishes such as hare with honey and claret.

Personally, I like to use it in simple recipes, but best of all, with honey as delicious as Andrew’s Colonsay honey, I also like to eat it neat, from a spoon, straight out of the jar. Nectar. 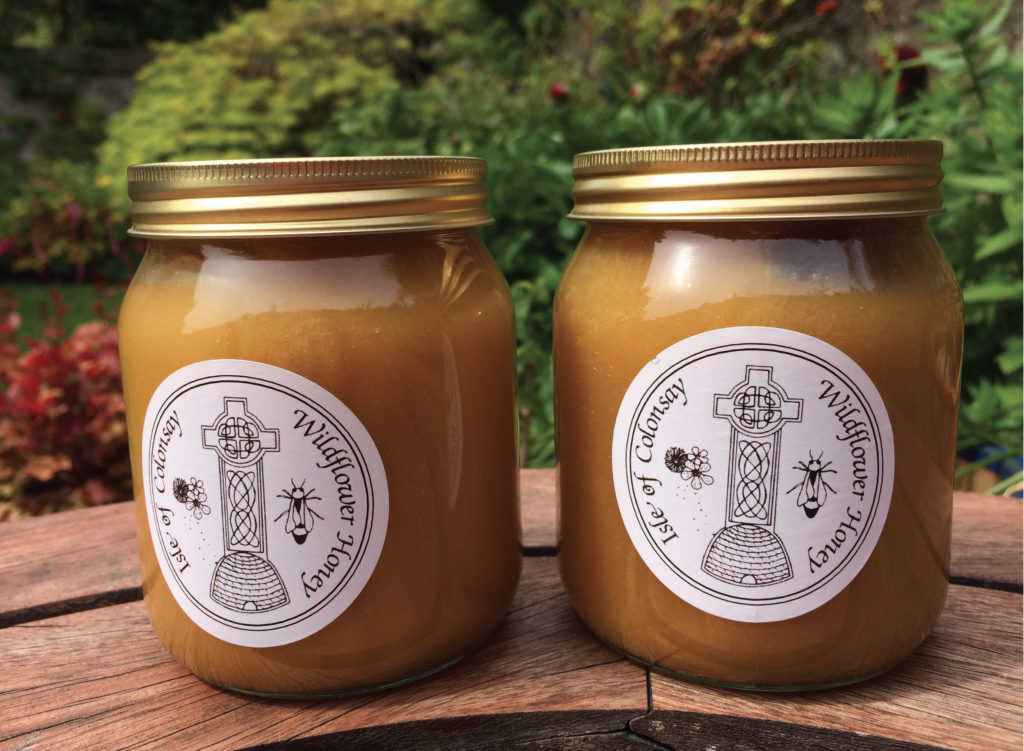 I had finished the jar of honey I brought back from the Colonsay Book Festival with indecent haste on my return to Edinburgh, but my agent Jenny managed to buy the last two jars in the village shop on Colonsay when she was there. And with this, I made this exquisite ice-cream. Because the recipe is so simple, the true, floral, elusive taste of island honey takes centre stage.

Pour the cream into a bowl and whisk gently (at low speed if using an electric mixer) for a couple of minutes, then increase to a medium speed (or use a heavier hand whisk!) until you can see it start to thicken.

Now add the honey, one spoon at a time, whisking after each spoonful. Add the salt and continue to whisk until you have soft peaks, then pour in the condensed milk. Using a large metal spoon, combine gently until thoroughly combined. It should be light and thick. Pour this mixture into a freezer container, seal tightly and pop in the freezer for several hours (at least 6 hours) or overnight. Let it wait at room temperature for a couple of minutes before serving, perhaps with some shortbread and berries: both strawberries and raspberries go well with honey.

A Taste of Scotland’s Islands by Sue Lawrence is published by Birlinn, priced £20.00

I Want to be a Machine: Warhol and Paolozzi

‘Paolozzi was a voracious consumer of images and information…’