The Declaration of Arbroath

‘It is in truth not for glory, nor riches, nor honours that we fight, but for freedom alone, which no honest man gives up but with life itself.’

This year sees the 700th anniversary of the Declaration of Arbroath, a document written and sent to Pope John XXII as part of a campaign, in 1320, to assert Scotland as an independent kingdom. The declaration went on to have wider influence with many believing it to be the inspiration behind America’s declaration of independence. In this anniversary year, three publishers are releasing books on the document’s history.

Declaration of Arbroath
By Tom Turpie
Published by Luath Press

First up is Tom Turpie’s pocket guide, Declaration of Arbroath. In the book, Tom seeks to contextualise the document, and to begin, he offers this historical timeline:

1290 Death of the Maid of Norway, Alexander’s only heir

1291­–2 The Great Cause; the legal process to choose a new King of Scots

1296 Wars of Independence begin with Scottish attack on Carlisle, English attack on Berwick and battle of Dunbar; King John surrenders to Edward I

1298 Scottish forces under Wallace defeated at the battle of Falkirk

1301–2 Debate in Rome between Scottish and English procurators, Edward I forced to back down

1306 (February) Robert Bruce murders John Comyn at Dumfries Greyfriars Kirk for which he is automatically excommunicated, inaugurated at Scone as Robert I on 25 March

1309 Declarations of the Scottish Clergy and Nobility sent to Philip IV, justifying support for Robert I

1314 (June) Scottish victory at the Battle of Bannockburn

1315 Robert I excommunicated for invasion of Ireland

1317 ‘Remonstrance of the Irish Princes’, letter sent to Pope John XXII from Ireland with similar theme to Arbroath

1346 David II captured at the Battle of Neville’s Cross

1998 Senate Resolution 155 officially designated 6 April, the date on the Declaration of Arbroath, as Tartan Day in the US

In April Scotland Street Press will publish Declarations on Freedom for Writers and Readers, an anthology of poetry, short stories, essays and letters exploring freedom of expression. With a foreword by Tom Devine, and contributions from writers such as James Roberton, Karen Campbell, Kirsty Logan, Donald S Murray, Carl McDougall and Zoe Wicomb, the collection is full of provocative, beautiful and necessary writing, all using the Declaration of Arbroath as inspiration. Here is a poem from the collection by Finola Scott.

The properties of declaration

In my mouth, it tastes too sharp, feels clumsy.
It tangles my tongue, makes me rant and rave.
In my ears it proclaims itself, emphatic,
sure of its direction, a no-compromise word.
I prefer my words rooted in woodland,
evergreen, shining in moon-glow.
Gently they plan, bend with the breeze, attend
the griefs of others, to the world’s sorrows.
This wise word welcomes, doesn’t draw lines
in the sand, instead consults crabs in pools.
It laments injustice, bewails the weak. It yearns
for freedom to speak, to be. It offers sanctuary to all.
The word fits my heart.

Lastly, the Saltire Society have published a beautifully illustrated history and reproduction of the declaration by Andrew Redmond Barr. He writes in the book’s prologue:

Ever since I first read about the Declaration of Arbroath it has lived in my imagination as an icon of Scottish independence. Its image is recognised throughout Scotland, and far beyond, because as well as being known for the message it contains it is also visually distinctive; a parchment letter with a thick morass of wax seals on ribbons hanging below, the signatures of Scots magnates and nobles tied one over the other, clustered and tangled as if attached in popular flurry. You can almost imagine the weight of it, and the unexpected delight of its creators in finding so many so eager to sign.

The Declaration of Arbroath was a diplomatic letter sent from the Scots to the Pope in 1320, calling for Scotland to be recognised as an independent kingdom against English claims of overlordship. Though written in the bleakest times of war, this Declaration spoke to the most basic human desires for freedom and peace, and revealed something profound about Scotland’s earliest ideas of people-power, liberty and nationhood. It represented an idea of Scotland so often almost lost and defeated throughout the ages, but always somehow mended and restored.

It is in the spirit of remaking that I approach the Declaration of Arbroath on its 700th anniversary. The Declaration lends itself naturally to illustration because the text itself is rich in images. Its message conjures a picture of a nation somewhat embattled and under siege, but also a nation hopeful for transformation, a nation ripe with stories and traditions and a nation in touch with Europe and its place in the wider world.

There has been a great volume of academic research into the Declaration of Arbroath and the Wars of Scottish Independence, much of which has been invaluable in the making of this book. I am not an academic but a writer and artist with a view that our history needs room to breathe outwith academia, and that artistic interpretation can aid our understanding of the past.

The life of a nation, like the life of a person, is a complex puzzle of episodes and events from which we try to find the threads of a story. What our most ancient texts lack in verifiable accuracy they make up for in another kind of truth, a bardic truth, a sense of how the country once felt, what people believed in, what frightened them and what gave them hope. All of this can be lost when history is reduced to dates, times, numbers and names. The chroniclers of the old Scotland were tale-tellers, and their tale-telling revealed something truthful about the time and place in which they lived.

First, it should be understood that the wars of conquest waged against Scotland in the Middle Ages were not simply designed to defeat the Scots army in battle, but to erase the very idea of Scotland from memory. All Scottish thought, Scottish art and Scottish writing today exists because an idea of Scotland, against all the odds, survived.

The Declaration of Arbroath remains today one of Scotland’s most cherished historical treasures. Its value is not in the parchment artefact itself but in the resonance of the words, the defiance of tyranny, the power of the people, the survival of Scotland – those words, ‘for freedom alone’, which still linger and lurk in the deep memory of the nation. Its image remains a permanent reminder of those Scottish rights so often lost and re-won throughout history, and the rights which in the eyes of many are yet to be won for a final time.

The written word has a long and enduring place in Scottish political life, and the Declaration of Arbroath rings sharply through the ages as perhaps our greatest ever demonstration of word-power. Today there are many people around the world seeking freedoms of different kinds, and my hope is that the Declaration of Arbroath on its 700th anniversary will reaffirm a sense that the written word and the freedom to write are vital to human expression and ought to be defended.

Centuries after it was first written, the Declaration of Arbroath still has something relevant to say about the world. The principle of the sovereignty of the people in particular endures through the ages. The assertion of the people’s demands over and above that of kings, parliaments, governments or political leaders, is today just as powerful an idea, and just as hotly contested.

The Declaration of Arbroath therefore is not only one of the primary foundation stones of Scottish identity, it is also the original document of Scottish democratic thought, a thread of which has found its way through centuries of cultural and political change to this very moment.

In creating this book I hope, in my small part, to celebrate Scotland’s historic presence in the world community, and to contribute as best I can to the carrying stream of this ancient but ever-evolving country. Illuminate our history and our history will illuminate us in return; that is the principal at the core of this book. 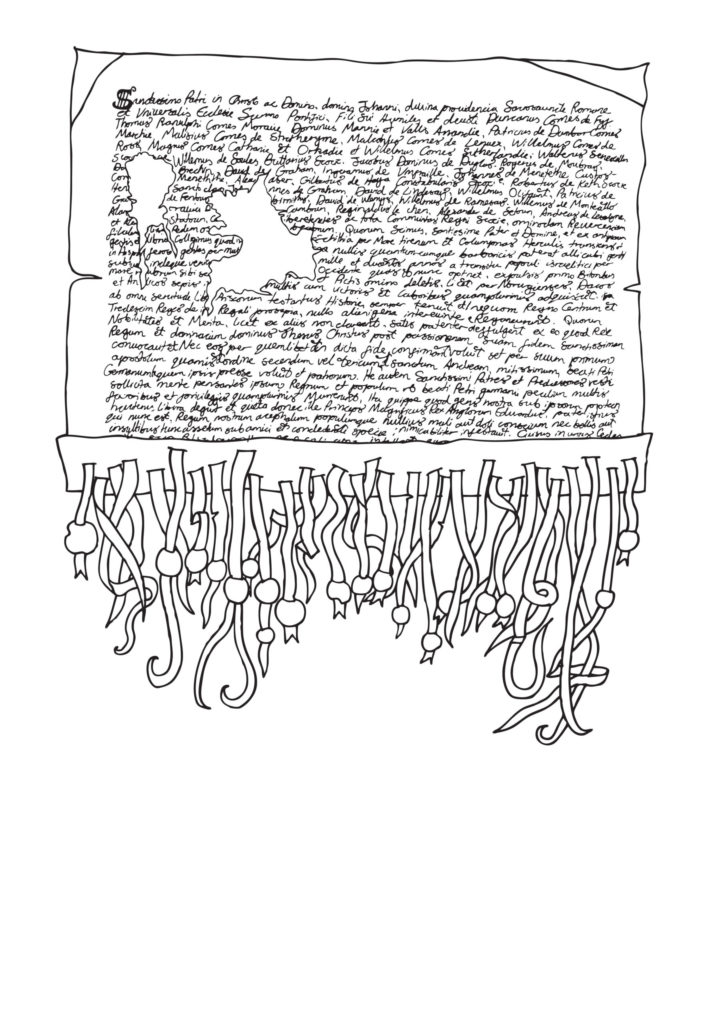 Declaration of Arbroath by Tom Turpie is published by Luath Press, priced £4.99

Declarations on Freedom for Writers and Readers, edited by Scottish PEN is published by Scotland Street Press, priced £9.99

The Illustrated Declaration of Arbroath by Andrew Redmond Barr is published by the Saltire Society, priced £14.99

The Book According To…Sally Magnusson

‘Honestly it’s gorgeous!  A divine shade of purple, with thistles that gleam in the light. The artis …

What We Did In The Dark

‘I feel as if my skin were glass, as if you read my thoughts almost before I think them.’