PART OF THE Quest ISSUE

‘Wherever I looked I could see these amazing birds, I was in a vulture landscape and my life was never going to be the same again.’

Ian Parsons has been watching vultures in their native habitat for a long time and has put all his experiences in his book A Vulture Landscape. Here he writes about his first encounter with these amazing birds.

A Vulture Landscape
By Ian Parsons
Published by Whittles Publishing

It was many years ago now that I first travelled through the Iberian Peninsula, and whilst it was a journey that wasn’t in the same league as Laurie Lee’s, it was still an eye opening adventure for me. Everything was different, the people, the culture, the architecture, the weather, but most noticeable to my young naturalist’s eyes were the landscapes and the wildlife. They were something else.

The hot, open, rolling plains of central Spain are, at first sight, dull and uninteresting places. But once you are off the fast straight roads that traverse them, you get to see them for what they really are. Wild flowers abound, a myriad palette of yellows, whites, pinks and purples splashed across a canvas of green, the hum of insects is everywhere, but this background buzz is drowned out by the bird song, the sky is full of larks, their song pouring down, the bubbling calls of rainbow coloured Bee-eaters mixes with the raspberry-blowing of displaying Little Bustards. It is an aural and visual experience.

It was here that I saw my first vulture, a huge aerial leviathan that flew on unflapping wings across the great expanse of open grassland, trailed by its equally huge shadow that followed it over the undulations of the ground. I was completely hooked.

Not long after I had seen my first, I was seeing more, lots more. They were materialising out of the blue from all directions, all heading to the same point over the plains. Within a few minutes they had formed a large loose circling mass, a kettle of vultures. They were mainly Griffon Vultures, birds with a wingspan of over 2.5 metres and even at the distance I was from them, they looked colossal. But there were other vultures with them, much darker in appearance, their wings held flatter as they too circled the land below. They were Black Vultures and they were even bigger, their wingspans edging up towards an almost unbelievable 3 metres. 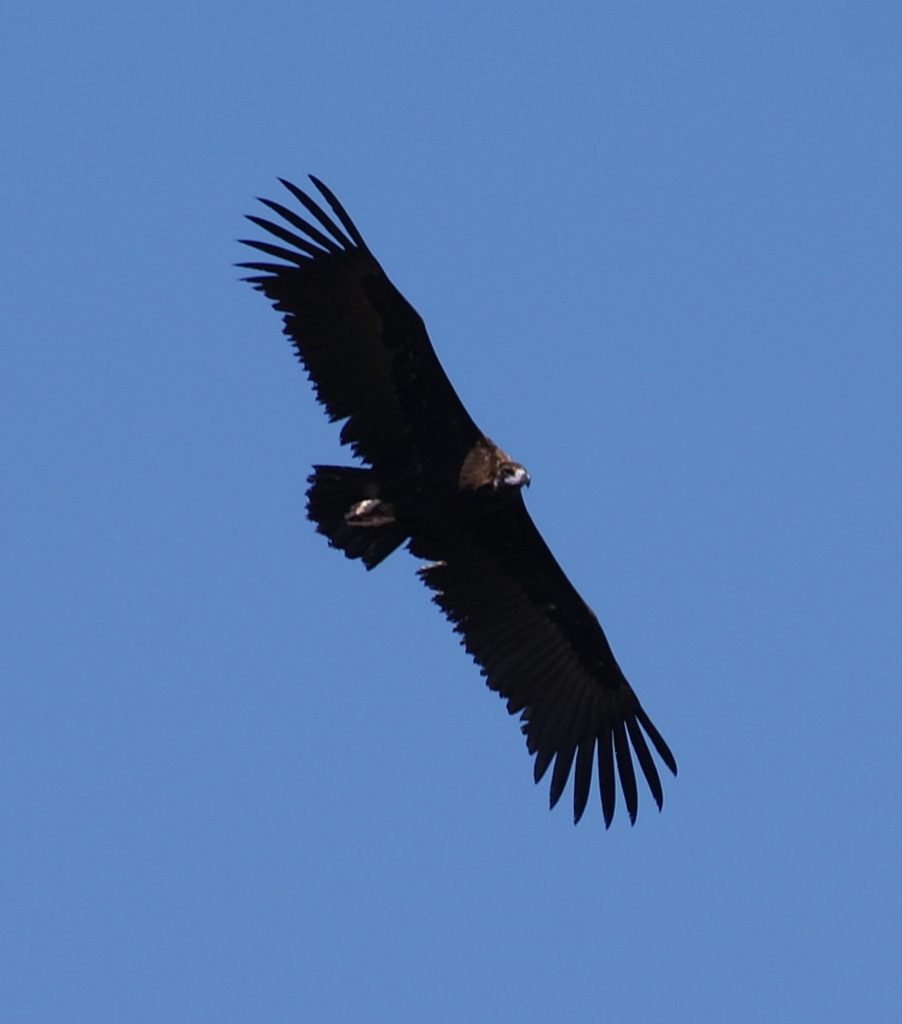 As I watched transfixed, the birds changed their behaviour, first one lowered its legs and dropped down towards the ground, vanishing from my sight behind an undulation in the plain, and then another, and then another, suddenly they were all dropping, raining down towards the grassland and all of them disappearing from view as they did so. I knew they had found a carcass and I knew I had to get closer to them; my compulsion for vulture watching began at that moment. 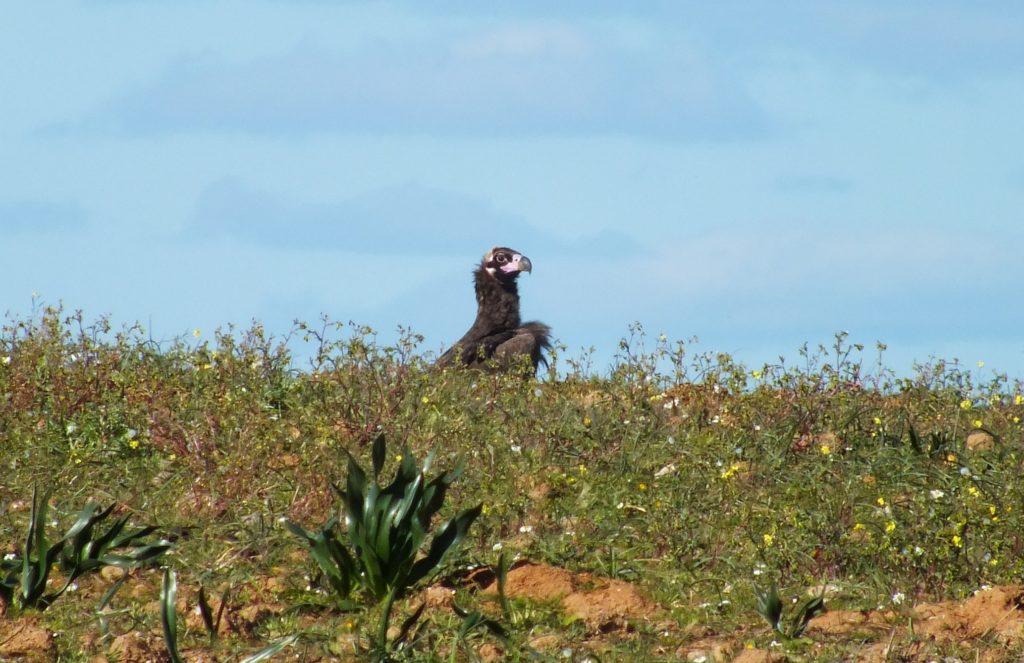 It took me a while to navigate the dusty tracks to put myself in a position where I could see the birds on the ground and by the time I arrived there they had finished feeding, some large bones and a bit of tattered hide were all that was left of what I guessed to have been a cow. The vultures hadn’t killed it, they are not predators, they are cleaners and they had thoroughly cleansed the environment of this carcass and the potential diseases it harboured.

The vultures stood scattered around the remains, dozens and dozens of them, I can remember that I counted 68 Griffon Vultures and four Black Vultures, all just there standing on the ground, letting their food go down about 100 metres from where I watched. I was close enough to hear them; occasional squabbles would break out amongst the Griffons and when they did, strange hissing noises and rasping cries of discontent would carry across the plain towards me, long necks would be thrust out, large beaks jabbed towards each other, the older, more dominant birds putting the younger, more subservient, birds firmly in their place. 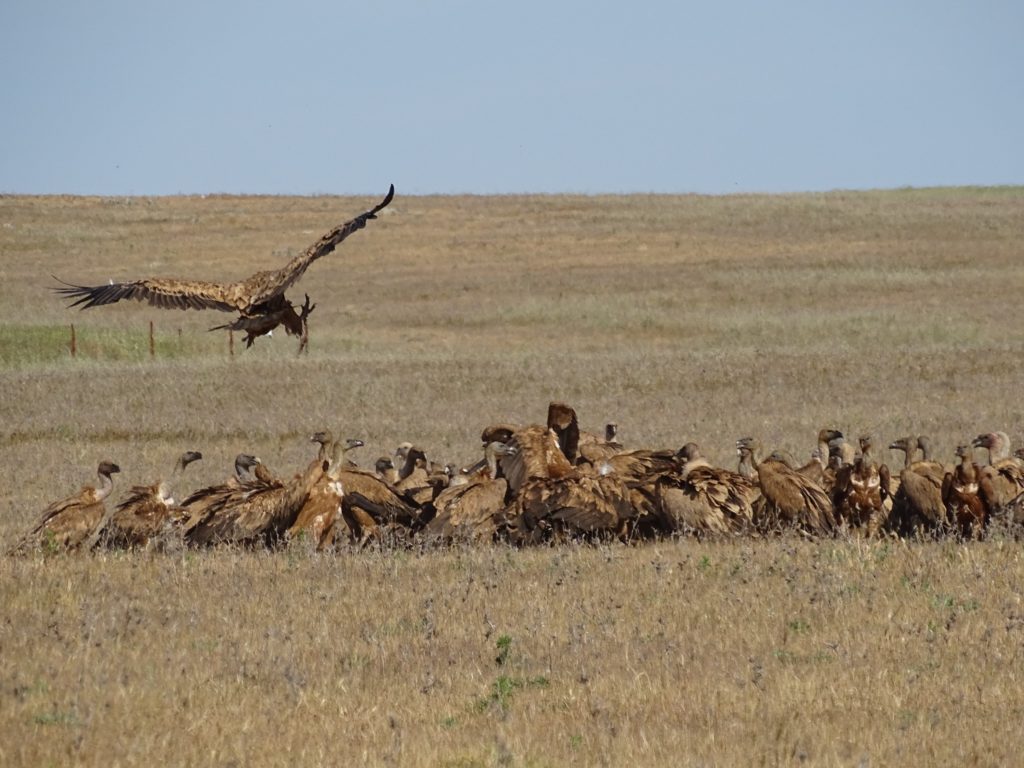 Even on the ground, with their huge, sail-like wings folded, they were still massive. I found it hard to grasp just how big they were until I realised that the small black bird picking its way amongst them, gleaning morsels from the ground, was in fact a Raven, a bird that is normally considered to be big.

There were other vultures around me, the birds on the ground may have been resting, but their presence had attracted others to see if there was still a feeding opportunity. Looking up, there were vultures all across the sky, flying in towards where I and the vultures stood, travelling with a purpose at first, before circling the scene and then slowly drifting off again to seek a meal elsewhere. Wherever I looked I could see these amazing birds, I was in a vulture landscape and my life was never going to be the same again.

A Vulture Landscape is my personal account of spending twelve months living within the vultures’ realm, following them and the many other wonderful species they live with during a year of their lives. The book looks at the vultures of Europe and beyond, it describes their lives, the problems that they inevitably face in this modern world and it celebrates them for what they are, brilliant birds! 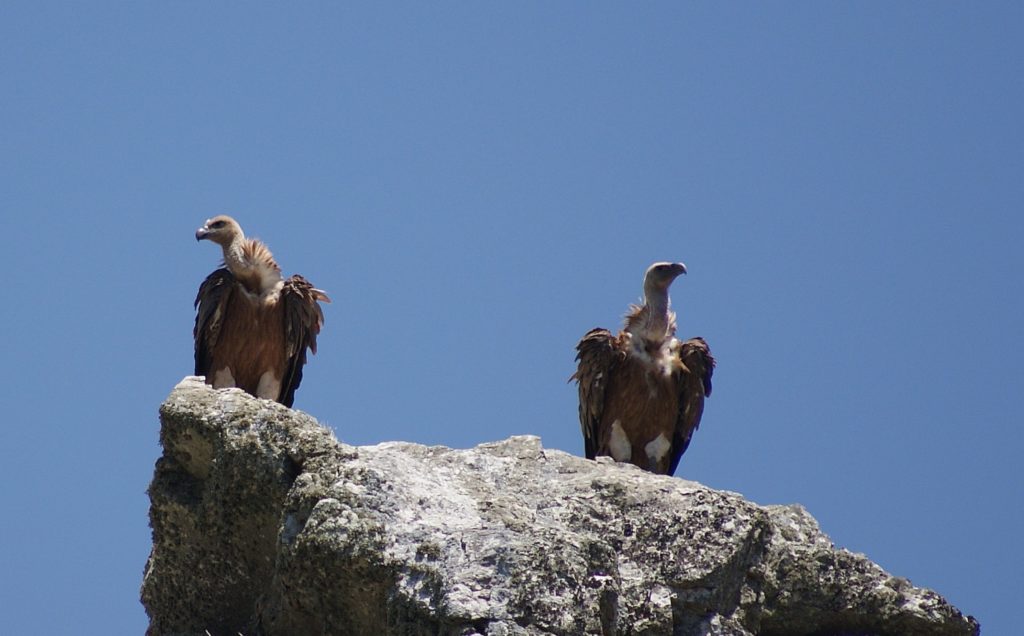 A Vulture Landscape by Ian Parsons is published by Whittles Publishing, priced £17.99.

‘We more than doubled our individual audi­ences. No wonder. The sound we made drew people from stree …

‘”You’ve done a splendid job. But I just can’t stop thinking about the reason I came here in the fir …