The Book According To… Ewan Morrison

PART OF THE Covet ISSUE

‘The question ‘What life-story can we live by? ’lurks beneath How to Survive Everything, and probably behind every book I’ve written.’

It has been said that readers are not ready to read pandemic novels yet, but when they are as thrilling as Ewan Morrison’s latest novel, How to Survive Everything, we think it’s safe to ignore that opinion! We caught up with him to talk about some of his favourite books.

How to Survive Everything
By Ewan Morrison
Published by Saraband

The book as . . . memory. What is your first memory of books and reading?

As a child, I used to tear through The Adventures of Tintin and Asterix the Gaul, but my first real experience of the power of the word was actually an audio recording of poetry. It was my parents’ copy of the album The Way I Say It – Poems by Norman MaCaig, read by Norman himself. There are so many inspired poems on that record, all read with such force and occasionally with MacCaig’s gently smiling wit: Man in Assynt, The Root of it, Truth of Comfort. I must have been about ten years old and I listened to the crackly LP, once every few weeks, with my headphones on, in between bouts of AC/DC and Black Sabbath. It struck me then that this old man was very wise, and that his wisdom was all tied up in this game he played with language. As MacCaig wrote ‘Ideas can perch on an idea, and sing’.

Forty years later, I find myself quoting his line from the poem Sparrow: ‘To glide solitary over grey Atlantics, not for him; he’d rather a punch up in a gutter.’ I only recently realised he was talking about a certain kind of people. Wonderful, wise Norman with his dry wit, introduced so many kids of my generation in Scotland to the wonder of words. 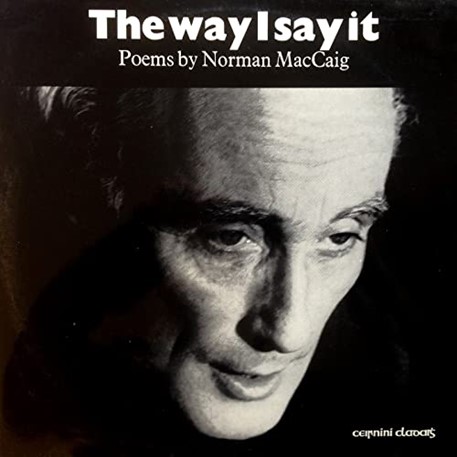 The book as . . . your work. Tell us about your latest book How to Survive Everything. What did you want to explore in writing it?

How do we survive things that seem too much to bear and that challenge the daily story we tell ourselves about reality? That’s what I really wanted to explore in How to Survive Everything. It’s written from the perspective of a teenage girl, Haley, who, along with her little brother is abducted by her father, Ed. Ed is a divorcee and a ‘prepper’ who’s been secretly preparing for the end of civilisation for years with a group of survivalists in an armed hideaway in the wilderness. The book is Haley’s own survival guide as she adapts to severe survivalist lockdown and as she uncovers her father’s obsessive faith in a world-ending pandemic. Haley’s mother ends up trying to snatch her kids back, and so Haley is caught in the middle, having to decide whose worldview to believe in – her Dad’s global apocalypse or her Mother’s belief that the pandemic isn’t even real and that Haley’s father is criminally insane.

There’s dark comedy in the novel as Haley explores questions of ‘Who can I believe and trust?’ in this era of fake news and conspiracy theories. The question ‘What life-story can we live by? ’lurks beneath How to Survive Everything, and probably behind every book I’ve written.

The book as . . . inspiration. What is your favourite book that has informed how you see yourself?

I think The Road by Cormac McCarthy had a huge impact upon me – probably from about 2012 onwards. It’s an Apocalypse narrative but it is permeated by such a profound sense of love between a parent and a child. Care, compassion, intimacy in the face of such horror. It’s impossible not to cry when reading The Road, and also to be amazed by the simplicity and beauty of its prose. It shook me on a number of levels. Personal it told me that being a father is incredibly important, and in terms of writing it made me want to take on the big themes we face as confront mortality. McCarthy has stripped away all that’s superficial in our civilisation and our language to ask ‘What really matters?’ It’s devastating book, a real life-changer.

The book as . . . a relationship. What is your favourite book that bonded you to someone else?

Back in the 90s I was blown away by Revolutionary Road by Richard Yates. I just couldn’t believe that this forgotten classic from 1961 could have such relevance to my generation. It’s all about a couple of beatniks who’ve sold out, who struggle against their stereotypical life roles and who plan to escape. It’s painfully psychologically honest. I loved that book so much that I kept loaning it to people, and then I’d have to buy another copy because I never got the loaned copy back, because it in turn was, without fail, always loaned to someone else. It spread, virally, because I would soon discover, I was not the only person doing this. I recall, meeting a friend in London who worked in film (he died of cancer in 2014) and we both got raving about how much we loved Revolutionary Road, and how we’d each bought about five copies over the years, all of which we’d ended up sharing or giving away. We realised that we’d been part of this strange underground sharing circle of devotees that spread across countries and borders. It was like we were dissidents sharing forbidden Samizdat books in the Soviet era. That was my first sense that a book can create a devoted secret society and make new friends. Oddly enough the huge underground friend-circle around this book led to the Hollywood movie being made in 2009.

The book as . . . object. What is your favourite beautiful book?

Ah, now, perhaps this is unfair because Dante’s Divine Comedy with the illustrations by Gustave Doré (1861) is as sublime as the illuminated manuscripts of the medieval era, but unlike those museum pieces it can be owned and taken home.

There is a lovely story about Doré’s edition of Dante that I like to call ‘The ass and the angels’. Originally Doré was supposed to create twenty illustrations for Dante’s epic poem with its three sections of Inferno, Purgatory and Paradise, but he became obsessed and couldn’t stop. Dore ended up making 135 illustrations and, in a panic, his publisher decided he no longer wanted to take a risk on publishing something so vast. So, Doré self-published the book. It sold out in a mere two weeks. His publisher then sent Doré the famous telegram that read: “Success! Come quickly! I am an ass!”

The illustrations are spell-binding and oddly uplifting, which is surprising given that they depict the nine circles of Hell.

This book was my constant companion in a time in which I was suffering from Chronic Fatigue Syndrome. It’s just possible the sense of wonder within the imagery, had some curative effect. 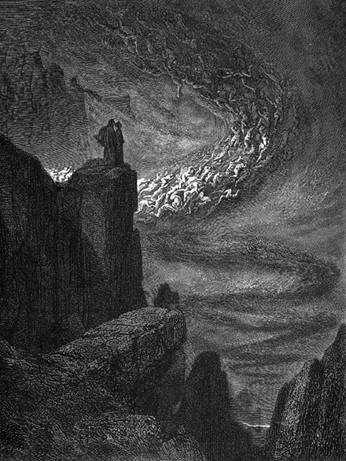 The book as . . . rebellion. What is your favourite book that felt like it revealed a secret truth to you?

The True Believer – Thoughts on the Nature of Mass Movements, by Eric Hoffer. First published in 1951, this is a brilliant study by a self-taught writer on what draws people to extremism. Hoffer has the courage to explore why people are drawn to totalitarian ideals, and some pretty devastating insights. Beware failed artists and idealists, he warns us. Beware of any group, whether political or religious, who claim that they have a single panacea solution to all of humankind’s problems; beware of people who are selflessly devoted to a cause – it is likely that they are motivated by resentment, there is a ‘venom and ruthlessness born of selflessness.’ As someone who came from three generations of fanatics, this book came as a necessary shock to my system; it convinced me to try to get rid of all the fanaticism and extremist thinking that was still lurking within me.

The book as . . . a destination. What is your favourite book set in a place unknown to you?

If I can travel through space and time then I’d have to say it’s the labyrinth library at the centre of The Name of the Rose (1980) by Umberto Eco. It’s a page-turning murder mystery set in an Italian Benedictine monastery with the largest library in Christendom in the early 14th century. The labyrinth holds the key to the murders, which are all connected to one lost and forbidden book. I wouldn’t be so keen to go back to the era of the black death, the inquisition, heresies and witch hunts, as no doubt I’d be one of the ones burned at the stake, but I’d like to find my own way in that labyrinth library, with its many thousands of ancient books that have now vanished from history. 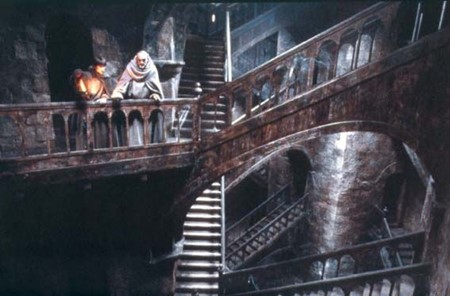 The film adaptation of Name of the Rose (1986). In the Labyrinth Library.

The book as. . .technology. What has been your favourite reading experience off the page?

I’m a terrible scribbler in the margins of all my books. In any book that I love you will find my scrawled handwriting every few pages or so, with asterisks, underlinings and arrows connecting passages. A real mess, and impossible for anyone else to read after me. I can’t do this in the same way with ebooks or PDFs, so I’m very much stuck ‘on the page’.

The book as . . . the future. What are you looking forward to reading next?

I’m a compulsive re-reader, and my next novel will be about an ‘outsider’ character who is potentially dangerous, so I have a stack here of brilliant ‘outsider classics’ to re-read next. They are Hunger by Knut Hamsun, Notes from the Underground and Crime and Punishment by Dostoevsky, The Trick is to Keep Breathing by Janice Galloway, Steppenwolf by Herman Hesse, The Mare and Veronica by Mary Gaitskill and of course The Outsider by Albert Camus. If anyone has any other Outsider suggestions, please get in touch with me on twitter: @mrewanmorrison

How to Survive Everything by Ewan Morrison is published by Saraband, priced £9.99.

‘Over this private banquet, Eugene and Nathan came to understand some of their more unusual, unexpla …