PART OF THE The Beauty That Surrounds Us ISSUE

‘The themes that run through Keats’s letters and poems, as well as Brown’s journal, emerged as more dramatic and intense when I looked at them again.’

In 1818, when Keats was 22, he and Charles Brown embarked on a walking tour starting in Lancaster and finishing – 44 days and over 600 miles later – just north of Inverness. This book recreates Keats’ tour, which inspired a sequence of lively letters, poems and more captured within. You can read an extract below.

It was not so much that I had a prospect to reach. I could not resist the urge to go back and ‘humbly assay’ scenes of Keats’s 1818 journey to the north. And so, in 2015 and 2016, camera in hand, I began to retrace the familiar route that was supposed to cap off at John o’ Groats but never did. Many stunning Scottish sites – a Turner sky over Kerrera, the watery approach to Staffa with its basalt columns and Fingal’s Cave, sunset over the bay at Oban, the roofless frames of Kirk Alloway and Beauly Priory, the profound openness of Cromarty Firth, the steadfast and seemingly ubiquitous Ailsa Craig, to mention a few – never change. Though as I went back to these sites at a later time in my life and a later period of history, I had to concede that the eyes of the beholder matter. I developed new insights and that is as it should be for the thoughtful traveller.

On the other hand, some places had changed significantly. In the little market town of Ireby, in Cumbria, the Sun Inn, where I last dined and chatted with the proprietors in 2001, no longer serves as a pub. The inn, where Keats and Brown stayed in 1818 and heard a dancing lesson going on in an upstairs room, is now a luxurious private residence, with part of the original building converted to a smart holiday home, irresistibly named Keats Barn. In Glenluce, Scotland, the small King’s Arms I had found so appealing stands derelict, though declared ‘listed’, while the other, larger, King’s Arms at the top of the hill, though intact, has been boarded up and closed to business. In the Highlands the old Oban Hotel, once black, is now white, with a terrace for social gathering built in front of it. The Letterfinlay Inn at the north end of Loch Lochy, where Keats wrote his excited report to his brother Tom following his successful Ben Nevis climb, including in it two poems, has been scrubbed, landscaped and, as it seemed to me, swept free of its history. In Fort Augustus the Abbey I had used as a stopping off point for lunch and a directional guide (the road north was along the side) has been replaced by a housing development. And Belfast! This time I was not stopped at a checkpoint by an armed guard who needed to inspect my backpack; I was free to roam this now vibrant central city. 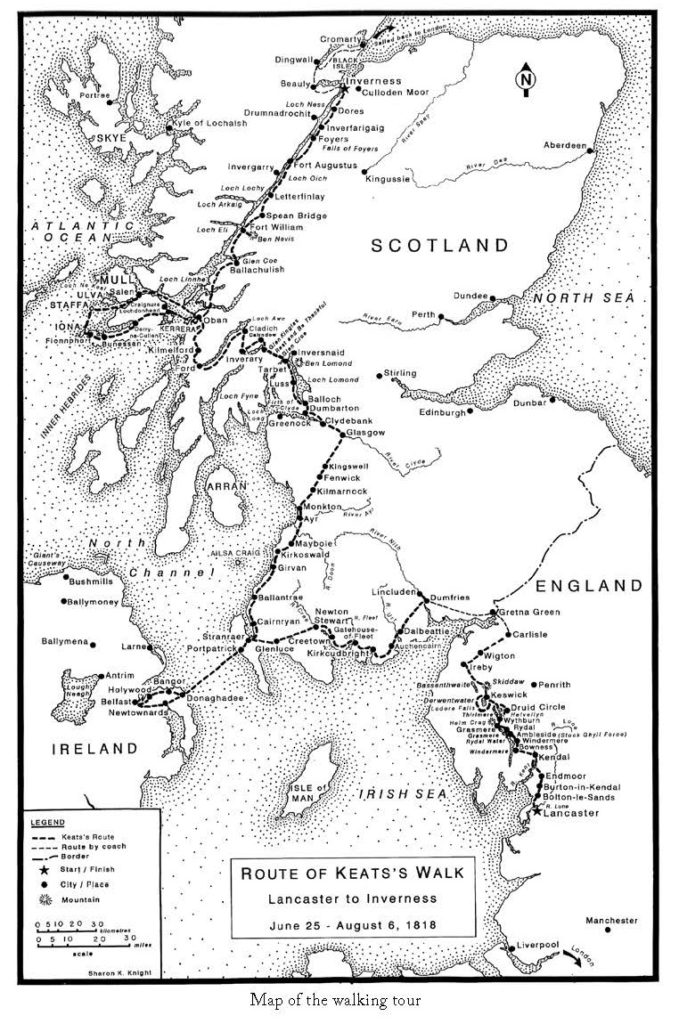 Not only had some places changed, I had as well. My perspective on the itinerary itself has shifted. Importantly, I see the tour as primarily oriented towards Scotland, though, to be sure, getting there by way of Lancashire, Westmorland and Cumbria was well calculated to satisfy an interest in visiting the celebrated English Lake District. The first waterfall Keats had ever experienced, Stock Ghyll Force, near Ambleside, thrilled him. And there was the lure of being in Wordsworth territory and attempting to visit him. But it was the compelling mystique of Scottish people and places that drew them to the north. As Keats wrote to his young sister, in the persona of a ‘naughty boy’:

Had the itinerary gone as originally planned, and Keats been able follow his nose to John o’ Groats, he would have spent much longer in Scotland than he was, in fact, able to do. The themes that run through Keats’s letters and poems, as well as Brown’s journal, emerged as more dramatic and intense when I looked at them again. I see with wiser eyes Keats’s melancholy over the separation from his brother George, who, with his new wife, was emigrating to America; his urgency to correspond with his other brother, Tom, who was dying of consumption, and his younger sister, Fanny, who was in the care of a guardian; his desire to keep their spirits up. I appreciate more keenly the often gruelling effort of pedestrian travel; as well, his compulsion to compose epistolary gems, some with poems, even in the most uncomfortable settings. I cast an experienced eye on Keats’s health and the strain he put upon it as, with passion but questionable judgement, he pursued strenuous physical tasks (like climbing Ben Nevis) and set extreme goals. The give and take of his friendship with Brown gave levity to the days on the go. But ultimately, we are left with the dark significance of the severe sore throat Keats contracted on the Isle of Mull.

Q&A: The Pharmacist by Rachelle Atalla

‘As far as I’m concerned, character is story – plot can always be adapted and fixed but a novel will …

Uncle Pete and the Forest of Lost Things

‘Along the way they encounter some scary, gigantic cats, a rogue tidal wave and other dangerous dile …