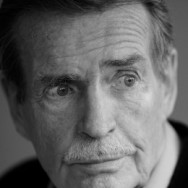 Novelist William McIlvanney was born in Kilmarnock and studied at the Academy there, before going on to read an MA in English at the University of Glasgow. After graduating in 1960, he worked for 15 years as an English teacher. His first novel, Remedy is None, won the Geoffrey Faber Memorial Prize in 1996. He is best known for his gritty portrayals of working class life in 1970s Glasgow and Kilmarnock (fictionalised as “Graithnock”). His 1975 novel Docherty won the Whitbread Novel Award, and its sequel, The Kiln, won a Saltire Society Award.

McIlvanney’s 1985 novel The Big Man was made into a film starring Liam Neeson and featuring Billy Connolly. His most recent novel is Weekend, published in 2006. McIlvanney is also a successful poet, with collections published in 1970 and 1991.

Unfortunately McIlvanney’s books went out of print but 2012 saw a real revival of interest in the author and his works. Canongate’s editorial director, Francis Bickmore, bought world rights and republished Laidlaw, The Papers of Tony Veitch and Strange Loyalties in 2013, followed by Doherty and The Big Man in 2014.

William McIlvanney’s brother Hugh is a respected sports journalist and writer, and his son, Liam McIlvanney, is an academic and novelist working in New Zealand. William McIllvanney died in 2015.