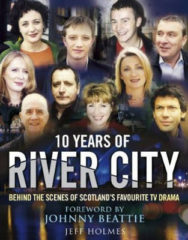 10 Years of River City: Behind the Scenes of Scotland’s Favourite TV Drama

Published to coincide with the show’s 10th anniversary, this is the definitive companion to “River City” – featuring 10 years of drama, unforgettable characters and behind-the-scenes secrets. From the first episode, when Tommy and Eileen tied the knot, through to Nicole’s edge-of-the-seat kidnap and bad guy Cammy’s demise, it’s all here. Cliffhangers (literally), births, deaths and marriages – and some classic “River City” cat fights. We take a peek back at the days when Stephen Greenhorn conceived the show and marvel at the mammoth task of creating your favourite soap on a weekly basis. Find out the real people behind Shellsuit Bob, Gina Hamilton and Stevie Burns. And, gasp, but did you know that “River City” was supposed to have a different title – and was initially scheduled to be set in a different city? Doesn’t bear thinking about, does it? Including exclusive interviews with River City creator Stephen Greenhorn and the show’s best-known actors through the years, this Shieldinch celebration is a must-read for all fans.

Jeff Holmes is a full-time journalist with Media Scotland but worked on River City for the first six years of the show as a prop man. Prior to that, he was employed by Scottish Television for 25 years, with the bulk of these spent in the drama department. He is the author of several books, including This is Scotland: 50 years of Scottish Television. Jeff is married to Elaine, and has two children, Derek and Carey, and a grandson, Josh. His hobbies include watching football and speedway.