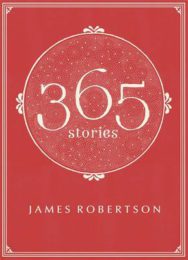 365 is James Robertson’s innovative collection of 365 stories, each 365 words long. In 2013, James Robertson wrote a story every day. Each was exactly 365 words long. A year later, on a daily basis, the stories were published on the Five Dials website. Now the 365 stories are gathered together in one volume. Some draw on elements of ancient myth and legend, others are outtakes from Scottish history and folklore; there are squibs and satires, songs and ballads in disguise, fairytales, stories inspired by dreams or in the form of interviews, and personal memories and observations. Underpinning all of them are vital questions: Who are we? What are we doing here? What happens next? “Wow. James Robertson wrote a 365-word short story each day in 2013. They’ll be posted throughout 2014”. (Ian Rankin, via Twitter). “A great storyteller”. (The Times). “One of Britain’s best contemporary novelists”. (Irvine Welsh, Guardian). James Robertson is the author of five novels, The Professor of Truth, And the Land Lay Still, The Testament of Gideon Mack, Joseph Knight and The Fanatic.The Testament of Gideon Mack was longlisted for the 2006 Man Booker Prize and selected for Richard and Judy’s Book Club the following year. Joseph Knight was the Saltire Scottish Book of the Year in 2003 and And the Land Lay Still was recipient of the same prize in 2010.