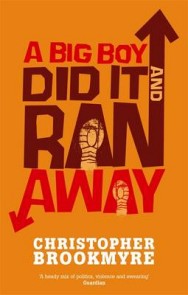 A Big Boy Did it and Ran Away

Back when they were students, just like everybody else, Ray Ash and Simon Darcourt had dreams about what they’d do when they grew up. In both their cases, it was to be rock stars. Fifteen years later, their mid-thirties are bearing down fast, and just like everybody else, they’re having to accept the less glamorous hands reality has dealt them. Nervous new father Ray takes refuge from his responsibilities by living a virtual existence in online games. People say he needs to grow up, but everybody has to find their own way of coping. For some it’s affairs, for others it’s the bottle, and for Simon it’s serial murder, mass slaughter and professional assassination.

Reviews of A Big Boy Did it and Ran Away

A bit like a literary computer game, this novel has plenty of verve and dash, with Brookmyre more in your face than a smack from an outraged lover whose bottom you've pinched. IRISH TIMES Brookmyre offers a brilliantly scathing portrayal of humanity… Sharply satirical and poignantly funny, this is a gripping and highly entertaining read. TIME OUT Hilarous, exhilerating entertainment. GLASGOW HERALD He really can write, with an exhilerating linguistic fluency and keenly subversive intelligence. SCOTLAND ON SUNDAY

Chris Brookmyre was a journalist before becoming a full time novelist with the publication of QUITE UGLY ONE MORNING. Since the first publication of A BIG BOY DID IT AND RAN AWAY, he and his family decided to move away from Aberdeen and now live near Glasgow. Oh, yes.