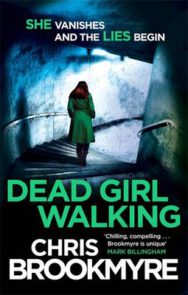 Life is dangerous when you have everything to lose. Famous, beautiful and talented, Heike Gunn has the world at her feet. Then, one day, she simply vanishes. Jack Parlabane has lost everything: his journalism career, his marriage, his self-respect. A call for help from an old friend offers a chance for redemption – but only if he can find out what happened to Heike. Pursued by those who would punish him for past crimes, Parlabane enters the world of Heike’s band, Savage Earth Heart, a group at breaking point. Each of its members seems to be hiding something, not least its newest recruit Monica Halcrow, whose possible relationship with Heike has become a public obsession. Monica’s own story, however, reveals a far darker truth. Fixated on Heike from day one, she has been engulfed by paranoia, jealousy and fear, as she discovers the hidden price of fame. From Berlin to Barcelona, from the streets of Milan to remote Scottish islands, Parlabane must find out what happened before it’s too late, all while the walls are closing in on him…

Tense, intense and quite, quite brilliant Jenny Colgan Has all the verbal and narrative energy of his best work. A pleasing mix of old and new, its country-hopping plot looks back to Grahame Greene and John Buchan, but the pop and media references are bang up-to-date — John Dugdale Sunday Times One of Brookmyre's most accomplished books… razor sharp The Big Issue 'Brookmyre writes beautifully and describes an unfamiliar world vividly and credibly… I was hooked' — Jessica Mann Literary Review

Chris Brookmyre was a journalist before becoming a full time novelist with the publication of QUITE UGLY ONE MORNING. Since the publication of A BIG BOY DID IT AND RAN AWAY he and his family decided to move away from Aberdeen and now live near Glasgow.