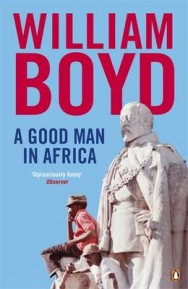 Home > Fiction from Scotland > A Good Man in Africa

A Good Man in Africa

“A Good Man in Africa” is William Boyd’s classic, prize-winning debut novel. It is winner of the Whitbread Award and the Somerset Maugham Prize. Escapee from suburbia, overweight, oversexed…Morgan Leafy isn’t overburdened with worldly success. Actually, he is refreshingly free from it. But then, as a representative of Her Britannic Majesty in tropical Kinjanja, it was not very constructive of him to get involved in wholesale bribery. Nor was it exactly oiling his way up the ladder to hunt down the improbably pointed breasts of his boss’ daughter when officially banned from horizontal delights by a nasty dose…Falling back on his deep-laid reserves of misanthropy and guile, Morgan has to fight off the sea of humiliation, betrayal and ju-ju that threatens to wash over him. “A Good Man in Africa” is one of the greatest comic novels of recent times and will be loved by fans of Any Human Heart, as well as readers of Ben Macintyre, Sebastian Faulks, Nick Hornby and Hilary Mantel. “Wickedly funny”. (“The Times”). “If a widening grim is the test of a novel’s entertainment value in retospect, “A Good Man in Africa” romps home”. (“Guardian”).William Boyd has received world-wide acclaim for his novels. They are: “A Good Man in Africa” (1981, winner of the Whitbread Award and the Somerset Maugham Prize), “An Ice Cream War” (1982, shortlisted for the 1982 Booker Prize and winner of the John Llewellyn Rhys Prize), “Stars and Bars” (1984), “The New Confessions” (1987), “Brazzaville Beach” (1990, winner of the McVitie Prize and the James Tait Black Memorial Prize), “The Blue Afternoon” (1993, winner of the 1993 Sunday Express Book of the Year Award and the Los Angeles Times Book Award for Fiction, 1995), “Armadillo” (1998) and “Any Human Heart” (2002, winner of the Prix Jean Monnet). He is also the author of a collection of screenplays and a memoir of his school days, “School Ties “(1985); and three collections of short stories: “On the Yankee Station” (1981), “The Destiny of Nathalie ‘X'” (1995) and “Fascination” (2004). He also wrote the speculative memoir “Nat Tate: an American Artist” – the publication of which, in the spring of 1998, caused something of a stir on both sides of the Atlantic. A collection of his non-fiction writings, 1978-2004, entitled “Bamboo”, was published in October 2005.His ninth novel, “Restless”, was published in September 2006 (Costa Book Award, Novel of the Year 2006) and his tenth novel, “Ordinary Thunderstorms”, published September 2009. His most recent novel is “Waiting For Sunrise” which published in February 2011.